Victorio had no intention of going to the San Carlos Indian Reservation, he would rather die. Broken promises and lies had eroded his tolerance for negotiations, leaving him no alternative but to go to war with the United States. It was 1879, Cochise was dead, and his Chokonen band of the Chiricahua had scattered, many gone to Mexico with his son Naiche and Geronimo. Chief Loco alone counseled for peace, choosing to remain on the reservation.

Victorio began a guerrilla campaign across the region, raiding ranches, homesteads, and military patrols. He allied himself with the Mescalero Apache, using their reservation to recruit, to resupply, and sometimes to shelter their women and children. By April, the Army’s 9th cavalry was in constant pursuit, though they were hopelessly outmatched by the Chiricahua’s superior stamina and knowledge of the region. In this way, Victorio was able to inflict a heavy toll on the Buffalo Soldiers, exhausting their mounts, supplies, and fresh water, then ambushing them when they were the most vulnerable. 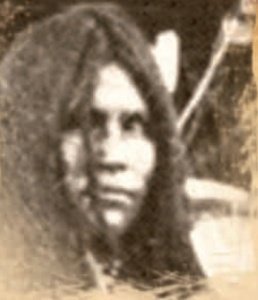 Serving as his lieutenants were his sister Lozen and the elder Nana, Mangas Coloradas’ most trusted advisor. Lozen was a formidable warrior and brilliant tactician. It is reported among the surviving Chiricahua that Lozen had “Power,” a gift from Ussen. She was said to be able to divine the location of the enemy through prayer, thus they were never taken unaware. Nana was close to 70 at the time and still a fierce warrior. His experience and leadership were crucial to Victorio’s success.

September of 1879 was a bloody one for Victorio, engaging in at least four battles with the Army while suffering no losses. At Ojo Caliente, they attacked an entire company of the 9th Cavalry, making off with over sixty horses and mules. Two weeks later, they lured a large detachment of the 9th into Las Animas Canyon, inflicting heavy casualties. At Cuchillo Negro, the Army employed Apache Scouts to track Victorio, leading to more Army losses. It should also be noted that, during this period, he also raided several homesteads and ranches, killing the occupants. Victorio did not hold quarter for civilians, or even women and children.

In October, Victorio crossed into Mexico, evading the Army and vanishing into the Guzman Mountains. Mexico had joined the hunt for Victorio, inspiring civilians and bounty hunters to mount hunting parties. On one occasion, in the Candelaria Mountains, Victorio ambushed and killed 15 Mexican civilians. When a group of 40 more came looking for them, he killed them too.

Despite the Army’s best efforts to intercept him, Victorio crossed back into the U.S. in January of 1880. In a bold maneuver, he returned to his homeland of Ojo Caliente with the intent of negotiating a surrender. The Army was still unwilling to allow them to settle at Ojo Caliente, at best they would be prisoners of war. With the negotiations failed, he fought the soldiers and, again, eluded capture. 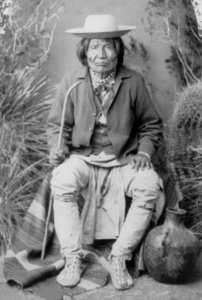 The largest battle of the campaign, and one of the largest in the Apache Wars, occurred between April 5th and 8th in the Hembrillo Basin. If you’ve read my books, The Yellow Painted Man and Tres Castillos, you will be well familiar with the location and the battle. Over 500 Buffalo Soldiers and Apache Scouts attempted to surround him, but Victorio held the high ground and tactical control of the only water source. Though many shots were fired, few actual casualties resulted from the fighting. Victorio’s strategy was to keep them pinned down and to exhaust their water supply, forcing them to retreat or perish from exposure. Eventually, the Army was reinforced and Victorio withdrew, suffering only a few casualties.

Victorio’s first defeat came at the end of May 1880, when 60 Apache Scouts surprised him at Palomas Creek. Over thirty of his band were killed, including warriors, women, and children. It should be noted that this victory was won by the Apache Scouts, not the soldiers. Also, it marks the first battle where Lozen was not present. She broke off from the group to escort a pregnant woman back to the Mescalero Reservation. It has been said that if Lozen had been present and used her gift, they would not have been caught unaware.

This defeat caused Victorio to divide his forces and to turn back south toward Mexico. The Army’s efforts increased, and he found himself engaging with the 10th Cavalry from west Texas as well as the 9th. Cooperation with the Mexican government led to even more soldiers, scalp hunters, and civilians joining the hunt. After another brutal defeat at Rattlesnake Springs, Texas, he found himself cut off from familiar territory and was forced to cross back into Mexico.

Desperately short on food and ammunition, he took refuge at Tres Castillos in the northern Chihuahua Desert. He sent Nana out to raid for supplies, who took much of their remaining weapons and ammunition.

On the night of October 12, 1880, Colonial Joaquin Terrazas and a force of 350 men came across Victorio’s beleaguered band. The Chiricahua fought with ferocity, expending their ammunition and resorting to rocks and hand-to-hand combat. In the end, they were overrun. A few women and children were able to escape, but 68 others were captured. 62 warriors, many just boys, were killed.

The death of Victorio is a matter of some debate. Most of the accounts of the battle are sourced from the Mexican soldiers who claim he was killed by a sharpshooter. While plausible, it is extremely unlikely that anyone on the Mexican side would be able to recognize him. Surviving Chiricahua claim that he took his own life, fatally stabbing himself in the heart with his own knife.

Click here for Part Six of The Apache Wars: Geronimo