The Lost Dutchman Mine Part Eleven: The Stone Maps

Click here for Part Ten of The Lost Dutchman Mine

The Dutchman is a complicated story with few facts and endless conjecture. By the mid-twentieth century, most of the original searchers were gone, along with any first-hand knowledge of Waltz and his mysterious mine. A new generation of Dutch Hunters took the torch, fueled by the writings of Barry Storm, Sims Ely, and others. Each of them brought something new to the Superstitions, leaving their marks and assembling the legend as they went. As the mythology developed, the facts became harder to divine, becoming lost in the accumulating misinformation and often blatant misdirection. Ironically, more than a few would-be treasure hunters were doomed to failure by the very same sources that inspired them to try their luck. Probably the most classic example of this are the “stone maps” known as the Peralta Stones. 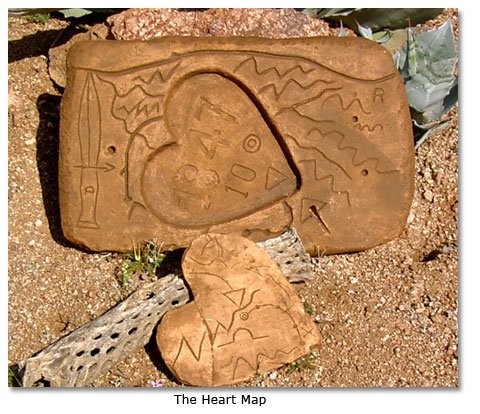 Barry Storm set the tone of adventure and intrigue in his book Thunder Gods Gold, invoking all the connotations of what a treasure hunt should be. Just a few years later in 1949, though dates differ between accounts, a man named Travis Tumlinson made a discovery that brought Storm’s vision to life with tangible evidence. This proof came in a set of five stone tablets, engraved with pictures, Spanish writing, and maps. Tumlinson claims to have made this find just off Highway 60, east of Apache Junction. Apparently, he pulled over for a rest break and found the corner of one of the stones sticking up out of the ground. Over the next few years, he allegedly found four more. 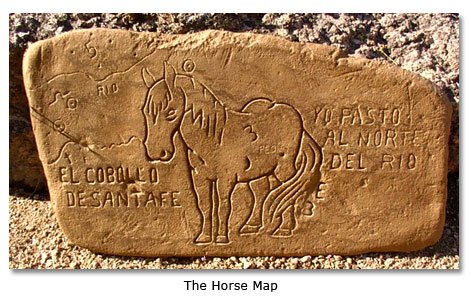 Four of the stones are tablet shaped, about 18 X 12 X 2 inches, and carved out of sandstone. The fifth is a heart–shaped stone that sets into a depression of another stone and is said to hold the key to deciphering the map. Among other information, the date 1847 and the names of Pedro and Miguel Peralta are present on the stones. To true believers, these maps lead to eighteen mines, scattered through the Superstition Mountains, abandoned by the ill-fated Peralta Family. Additionally, two stone crosses have been found and are believed to belong to the set. 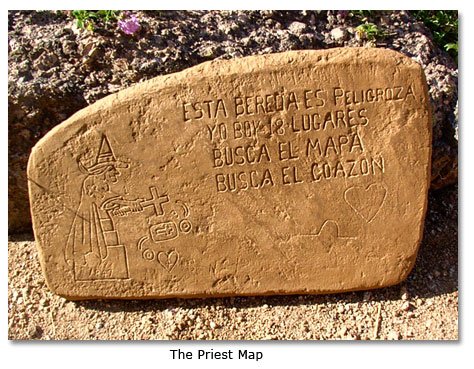 The authenticity of the stones is a matter of extreme controversy, to say the least. Even the discovery of the stones is debated, with two separate individuals claiming that they sold the maps to Tumlinson. Skeptics cite several glaring issues, namely that the stones misspell common Spanish words, that the “valentine” heart design would not be common in 1847 Mexico, and, most damning, that they appear to have been created with modern tools.

Recent research into Tumlinson shows the man to be familiar with stone carving and he is even known to have created a stone treasure map as an art piece. One investigator, upon visiting the ruins of his house, discovered carvings in the brick of his chimney that are similar in style, if not subject, to the Peralta Stones. Additionally, handwriting analysis was performed on known works of Tumlinson and compared to the stones, the results being an almost certain match. One would think, when confronted with this evidence, that it would put the matter to rest, yet it has not. For those infested by the gold bug, the power of belief can be an indomitable thing. 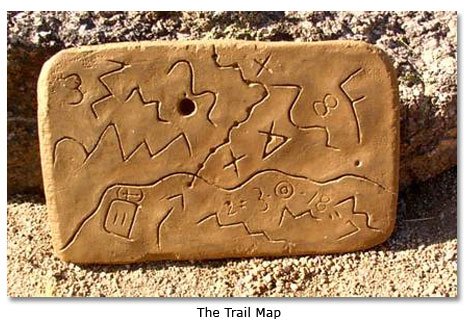 Admittedly, the stones are intriguing and it is easy to fall sway to their spell. They offer an equation that is there to be solved, a flesh and blood riddle, self-contained and begging for analysis. It’s an eloquent, fitting puzzle piece, to be sure, but one that does not belong to the picture, in my opinion. Regardless of my feelings on the subject, interpreting the stones remains one of the most popular approaches to date in solving the riddle of the Dutchman.

Modern searchers have faced a daunting task indeed, sifting through the fantasy and sorting the facts. Ultimately, research and common sense would prove to be the best tools in ferreting out the truth. Next week we’ll discuss some of the modern Dutch Hunters, how they found the Dutchman, and ask the question; was it ever really lost?

Click here for Part Twelve of The Lost Dutchman Mine