The Lost Dutchman Mine Part Ten: The Dutch Hunters

Click here for Part Nine of The Lost Dutchman Mine

The death of Adolf Ruth brought national attention to the legend of the Lost Dutchman Mine. Considering that the events played out during the height of the great depression when people were desperate for any kind of distraction from the daily malaise, it is easy to see why it captivated the public’s imagination. It also served as an abstract sort of validation, that if Ruth was murdered while seeking the mine, then there must be something there worth murdering for. This renewed interest inspired a veritable army of treasure hunters to descend on the Superstitions, seeking their fortune. No telling of the Dutchman’s story would be complete without acknowledging some of the more eccentric characters who, in their searching, became legends themselves.

One of the first books on the subject was Thunder Gods Gold by Barry Storm, published in 1945. Storm purports the events to be his true and actual experiences in the Superstitions, though it reads equally well, and almost better, as fiction. To his credit, he does faithfully retell the Dutchman story as accurately as any of the early authors, albeit with his own flair. His narrative is filled with secret trail markings, Spanish mines, and other unsubstantiated archaeological discoveries, all discovered while being stalked by a mysterious sniper he calls Mr. X. So dramatic was his tale that it inspired the 1949 Hollywood movie Lust for Gold. 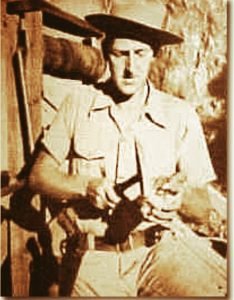 One persistent belief in Dutchman lore is that the early searchers perpetuated a deception to misdirect future seekers to the western side of the mountains, specifically near Weavers Needle. Regardless, more than a few Dutch Hunters have been enthralled with the landmark, fixating their efforts there. None more so than Celeste Marie Jones and her mortal enemy, Ed Piper.

Jones came to the Superstitions in 1949, making her first claim at the Needle. Little is known of her outside of her time in the mountains. The popular story is that she was an opera singer from Los Angeles. It was her belief that Weavers Needle possessed a solid core of gold and she that intended to extract it to help fund her church in L.A. She spent the better part of ten years trying to do just that, even going as far as installing a rope ladder to the top of the peak!

Jones came to the Superstitions in 1949, making her first claim at the Needle. Little is known of her outside of her time in the mountains. The popular story is that she was an opera singer from Los Angeles. It was her belief that Weavers Needle possessed a solid core of gold and she that intended to extract it to help fund her church in L.A. She spent the better part of ten years trying to do just that, even going as far as installing a rope ladder to the top of the peak!

Ed Piper arrived sometime in 1955, establishing his camp below the needle in East Boulder Canyon. The two camps co-existed peacefully for a while, but things soon soured. Like many treasure hunters, Piper was paranoid and began accusing Jones’ men of stealing from his camp. Several altercations occurred over the years, escalating the drama. The feud came to a head in 1959, when Ed Piper shot and killed one of Jones’ men, Robert St. Marie. St. Marie came across Piper and threatened to kill him for being on the Jones claim, his gun allegedly misfiring. Piper drew his pistol and shot him dead, then reported the incident to the Pinal County Sheriff. He was ultimately exonerated of any wrongdoing. Not long after, the Forest Service closed off the Needle to mineral excavation. Barring any secret cache of treasure hidden there, Weavers Needle never held any gold. 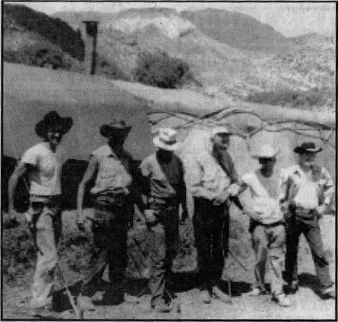 Probably one of the most enigmatic and controversial treasure hunters to come after Jacob Waltz’s gold was Robert “Crazy Jake” Jacob. Considering the man had no legitimate, or at least verifiable, discoveries in the mountains, he is arguably the most memorable Dutch Hunter of his time. Jake came to the mountains in 1966, maintaining elaborate camps near Peter’s Mesa for over twenty years. Nearly everyone who encountered the man came away with their own “Crazy Jake” story. Described as charismatic, fast talking, and intimidating, he straddled the line between businessman and con artist.

One of my favorite Crazy Jake stories is told by legendary Dutch Hunter Clay Worst. Worst describes the first time he met him while he was coming out of the mountains and Jake was going in. They had a brief conversation in which Jake explained how he had found a Spanish mine in the Red Hills based on research done by a man named Clay Worst, who clearly didn’t dig deep enough. As they parted ways, Clay introduced himself, much to their mutual amusement. 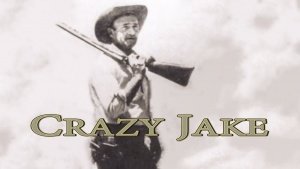 Crazy Jake was famous for his bold claims, generally that he had discovered the Dutchman’s mine. To this end, he solicited millions of dollars from investors, a practice that would eventually lead to him being prosecuted for fraud. Jake claimed to have found a cave full of gold bars, he just needed financing to recover them. Oddly, no one asked why he had not just removed one and sold it to finance the rest. The district attorney at the time was a man named Bob Corbin, who later retired to search for the Dutchman himself, who said that witnesses for the trial were reluctant to come forward and testify. Apparently, they still clung to the hope that Jake had really found the gold.

Probably the greatest trick Jake pulled, if true, was faking his own death. Allegedly Jake died in the early 90s, not long after being released from prison. However, there are several accounts from reputable sources, that place Crazy Jake in the Superstitions well after his supposed death. Famed local historian Tom Kollenborn received a phone call by someone claiming to be Jake which, to the best of his knowledge, seemed credible. Considering the mythos surrounding the man, it’s certainly plausible.

Click here for Part Eleven of The Lost Dutchman Mine