Click here for Part Five of The Lost Dutchman Mine

Sims Ely was born in Overton County, Tennessee, in 1862, spending his early years in farming and agriculture. In 1874, his family relocated to Kansas, where Sims began studying law and writing for local newspapers. Over the next few years, he would become the editor in chief of several news publications and serve as a secretary to Kansas Senator John Martin, before resigning in 1895 to take on the job of Water Storage Manager for Arizona’s Roosevelt Dam project on the Salt River. It was around this time that he met Jim Bark, becoming life-long friends and partners in the search for the Lost Dutchman Mine.

Like Jim Bark, Ely was a pioneer in the search for the Dutchman and was in a position to know all the original players except for Jacob Waltz himself. In his twenty-five years with Bark, he came as close as anyone to unraveling the truth of the mystery. That said, Sims Ely’s legacy in the Dutchman story leaves us with some curious questions, strange inaccuracies, and contradictions with other well-respected sources.

In my retelling of the legend, I’ve tried to clarify as best I can where information is sourced from, particularly by tracing it to either the Petrasch/Thomas or Holmes camps. In his book The Lost Dutchman Mine, Ely cites his extensive interviews with Julia Thomas and the Petrasch family, but he fails to even mention Dick Holmes. Strangely contradicting other accounts, Ely gives an entirely different version of Waltz’s last days. As near as he comes to mentioning Holmes or Gideon Roberts is to say that some “unknown” person snuck into Julia’s house while they were at Waltz’s funeral and stole the gold ore Waltz had left her.

Other principal differences in Ely’s version are the origin of Waltz, his mine, and the addition of a partner named Jacob Weiser. Ely claims his version of the story came directly from Waltz via Rhiney and Julia, going to length to describe why he believes them. In this version, Waltz and Weiser are in Sonora, Mexico, when they rescue a man named Miguel Peralta from a violent poker game. Peralta, in turn, rewards the two Jacobs with a stake in his mine. Later, while working this mine, Weiser is killed in an Apache attack leaving Waltz sad and fearful of returning. Ely’s narrative is so eloquently described and vivid in its details, that it strains credulity in light of other, less fleshed out accounts that are also said to originate from the Petrasch/Thomas camp.

Ely’s book continues in this direction, detailing several stories that have since formed the bedrock of Dutchman lore. Included in these accounts are his versions of the Two Soldiers, the Joe Deering, and the Dr. Thorne stories. All these accounts he delivers with an uncanny collection of details, references, and corroborating anecdotes. Echoes of these tales have been re-told for generations now and have certainly influenced countless Dutch Hunters in their quests. Ely writes with such convincing authority on the subject and his reputation is so sterling that it is easy to see how someone would accept his word as gospel. The fact of the matter, however, is that there are many glaring inaccuracies that cast doubt on much of his work. 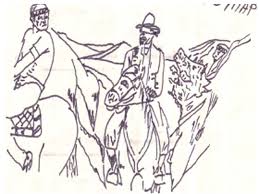 One example is the story of Dr. Abraham Thorne, who in 1865 served as a physician at Fort McDowell. Dr. Thorne was particularly friendly with the local Apache and often gave them medical attention. After providing lifesaving aid to a Chief, Thorne was rewarded by the Apache. Allegedly, they blind folded him and led him into the Superstitions, only letting down the blindfold when they had arrived at a prepared spot where they had laid out a pile of gold ore for the doctor as payment. On the return trip, Thorne’s blindfold slips and he glimpses some distinctive landmarks. The gist of the story is that it is the same mine as the Dutchman’s. This story did not originate with Ely and there are several versions, though Ely’s telling is thorough, complete with biographical details that ought to be enough to authenticate his claims. The problem is that there is no evidence of Dr. Thorne’s existence, let alone of any such transaction having ever occurred. It’s one thing to document the stories with as much detail as you can find, but where did Sims Ely find his sources?

There are many other problematic details that, for me, just do not add up. Principal among them is the theory that Waltz had a partner. Ely tells of how Waltz and Weiser were attacked by Apache while working the mine. Weiser, unknown to Waltz, lived long enough to crawl through the desert to the house of a certain Dr. Walker who lived among the Pima and Maricopa. In short, Weiser gifted the doctor with a rawhide map detailing the path from Sonora to the mine in the Superstitions. This map was allegedly given to the two Jakes by Miguel Peralta. Ely fortifies this claim with a long biography of Dr. Walker and his historical contributions (some invented) to the Arizona Territory as well as the provenance of the map up until its convenient disappearance. The issue, though, is that more can be proven false than can be proven true, calling into question if any of it can be believed. 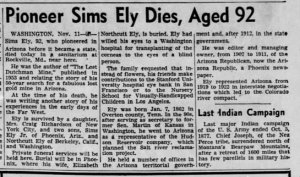 It is not my intent to discredit or slander Mr. Ely, by all accounts the man is a veritable saint in the pantheon of Dutch Hunters. Personally, I suspect there was a certain amount of embellishment and misdirection in his text. As readers, we also expect the product of his work to be as factually accurate as possible. What we have is something else entirely, begging the question of whether it was intentional misdirection and, if so, why?

Yet another puzzling piece of the elusive Dutchman mystery.

Click here for Part Seven of The Lost Dutchman Mine