With the death (murder?) of Doc Noss and the peak coming under the jurisdiction of the White Sands Missile Range, excavations all but ceased in the late 1950s. Complicated by a lack of documented permits, multiple claimants, and the military’s reluctance to cooperate, the story drifted into legend.

In 1961, two airmen from nearby Holloman Airforce Base, named Berlett and Fiege, claim to have discovered the treasure vault via another, natural, opening in the peak. Allegedly, they found hundreds of gold bars weighing over forty pounds each. Berlett and Fiege, unsure of how to proceed with claiming a treasure trove under military jurisdiction, reported the find to their commanding officer. More complications ensued as White Sands is a completely different command, resulting in the site to be shut down to military as well as civilian personnel. Fiege and Berlett’s claim would sit for over three years before they were allowed on the peak again. Of course, when they returned, they found their previous entrance impassible. 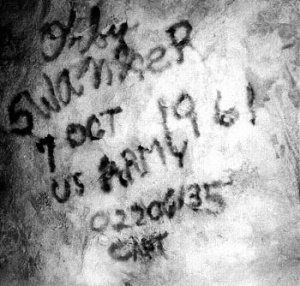 In June of 1963, the military allowed a partnership under the Gaddis Mining Company to work the site. Not surprisingly, their efforts were fruitless. There were still many claimants to the treasure fighting for their right to work the site, most prominently Ova Noss. The dispute lasted for years, leading to the involvement of noted attorney F. Lee Bailey who represented a group of claimants including Ova Noss, Violet Noss Yancy, the Fiege group, and others. The result was a compromise, allowing the group access to the peak in 1977. This, however, was only for a supervised two-week period, proving to be insufficient to make any noteworthy progress. Ova died in 1979, never having realized her dream of recovering the treasure. Her grandson, Terry Delonas, formed the Ova Noss Family Partnership and won conditional access to the peak under government supervision. To this date, no treasure has been recovered, though evidence does suggest that something was hidden within the peak.

Personally, I find Doc Noss’ original account to be the most fascinating aspect of the story; not that treasure existed but the strange nature of the treasure: the presence of Spanish artifacts, Mexican and American gold coins, a jeweled crown engraved with the name Charlotte, and the proliferation of gold ingots. It suggests treasure from at least three sources, Spain, Mexico, and the United States. While the caverns of Victorio Peak, according to Noss and other accounts, show signs of human working, it was certainly not the origin of the gold ingots, though the nature of the ingots suggests (though none exist to test) a crude and impure quality consistent with early Spanish mining practices. Among the documents allegedly recovered, was a Spanish transcript attributed to Pope Pius III describing the seven cities of gold. Then there is the case of the saddlebags and Wells Fargo bags and chests dating from the late 1870s to 1880. A curious collection indeed, that seems to be a strange fabrication if one were considering hoaxing such a story. 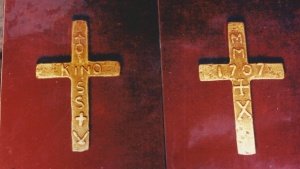 What we end up with, and what I have cannibalized as one of the central themes of The Yellow Painted Man, is the convergence of three legends, the first being the lost Padre Mine or the mine of Padre LaRue. We don’t have time for that story here, but it is a good one. The second stems from the belief that ill-fated Emperor Maximillian I of Mexico deposited a hoard of treasure somewhere north of El Paso del Norte (present day Juárez) to protect it should the war against him go poorly, and it did. Lastly, we return to the peak’s namesake, Chief Victorio. Victorio was known to conduct raids across the region, with Wells Fargo and other shipments being a popular target. This would account for the modern artifacts and the Native American graffiti.