The Baron of Arizona: Part Two

Click here for Part One of The Baron of Arizona

It bears mentioning that the mysterious death of Reavis’ partner, George Willing, is a safe barometer of the local sentiment toward their claim. Even in the early stages of the claim, dozens, if not hundreds, of prospectors and landowners fell under its jurisdiction. Imagine their outrage in being told that the claims they had labored on for years no longer belonged to them unless they wished to pay a quitclaim fee. It is no surprise that his death went uninvestigated. Strange and unwitnessed circumstances, indeed.

Reavis stayed clear of the Arizona Territory for the next two years, spending his time in California, working as a schoolteacher and a newspaper reporter from 1878 to late 1879. As a reporter, he secured several friendships and professional connections, including senators, congressmen, railroad executives, and other prominent businessmen. He also became intimately familiar with the workings of the Public Lands Commission. At the time, about seventy percent of the land claims filed were approved and even the frivolous ones were considered. Bribery factored heavily in the equation, as did the Commission’s reliance on the claimant to produce proof and documentation. Emboldened by his new contacts and his knowledge of land claim protocols, it was time to return to Arizona.

Reavis arrived in Prescott in 1880. Before he could proceed with the claim, he had to first settle the affairs of George Willing, who had sold off the mineral rights to parts of the claim. He then had to buy out his former partner’s interest from his widow at the cost of $30,000, paid over time. While in the territory, he published several anonymous newspaper articles mentioning the claim, creating a buzz about the project. Reporting that prominent organizations like the Southern Pacific Railroad and the Silver King Mine were going to honor the claim and pay quitclaims went a long way toward the perception of credibility.

Reavis then went on a fact-finding tour to dredge up evidence and documentation to support his claim. This is where truth and fiction become inseparable. Reavis traveled to Washington D.C., Mexico, and Spain, all under his familiar guise as a newspaper man. He developed relationships with clerks and archivists wherever he went, enabling him to access seemingly every depository of records he required. By 1883, he had acquired over two steamer trunks full of “evidence” supporting his claim.

Reavis’ claim is elaborate, to say the least. At its core is the fictional history of the “First Baron of Arizona,” Don Miguel Nemecio Silva de Peralta de la Cordoba. Allegedly, Don Miguel was granted the land while serving the King of Spain in 1727. The details provided about the man, his accomplishments, and his lineage are formidable. Indeed, the volume of documentation provided to support the claim rendered it nearly irrefutable. 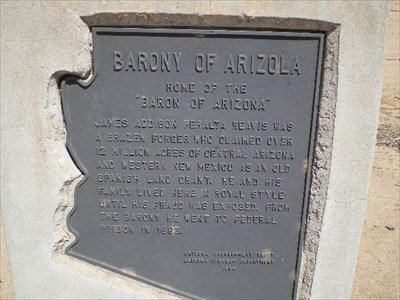 The official filing came on March 27, 1883, in Tucson, Arizona. Surveyor General J.W. Robbins allowed the claim to proceed, pending investigation. Reavis immediately set about the business of collecting quitclaims. Setting up his headquarters at Arizola, near Casa Grande, on the remains of ruins said to be inhabited by the original Baron of Arizona, he began the construction of a palatial estate at the location.

With the publicized purchases of quitclaims by Silver King, the Southern Pacific Railroad, and other prominent businesses and citizens, the outraged populace reluctantly fell in line. Reavis hired an army of land agents and collectors and set about bilking landowners for whatever he could. There was no apparent formula for tabulating the price of the quitclaims. In some instances, a landowner would pay $1000 while another might negotiate for something as insignificant as the price of a couple drinks.

Reavis was rich, pulling in hundreds of thousands in quitclaims. However, his success would soon be threatened, and his claim would undergo serious scrutiny.

Click here for Part Three of The Baron of Arizona