Before Charles Lindbergh and before Emelia Earhart, there was Bessie Coleman.  In an age when aviation captivated the nation, Queen Bess was one of the greatest pilots of the time.

She was born in Dallas in 1892, where her family worked as sharecroppers. Though her means were modest, Bessie took advantage of every opportunity afforded her. She excelled in primary school, earning a scholarship to the Missionary Baptist Church School at the age of Twelve. At eighteen she took her savings and completed a semester at Langston before running out of money. In 1916, while living in Chicago, she began to hear the stories of pilots returning from WWI. It was these stories that fueled her imagination and inspired her desire to fly. 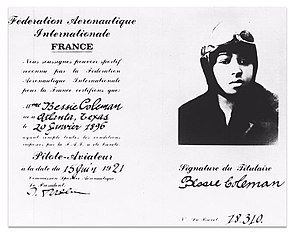 “The air is the only place free from prejudices. I knew we had no aviators, neither men nor women and I new the race needed to be represented along this most important line, so I thought it my duty to risk my life to learn aviation.”

At the time, flight schools in the united states did not accept women or blacks, requiring her to travel to Europe to receive training. Coleman worked two jobs to save the money, also receiving sponsorship from Jesse Binga, founder of the first privately owned African American Bank, and Robert Abbot, publisher of the Chicago Defender. In November of 1920, she departed for Paris.

On June 15, 1921 Bessie Coleman became the first black woman and the first Native American woman to earn an aviation license. Not satisfied with the mere achievement, she continued her training, learning from some of the greatest pilots, engineers, and designers of the day, including the legendary Anthony Fokker. With her training complete she was ready to return to the United States. 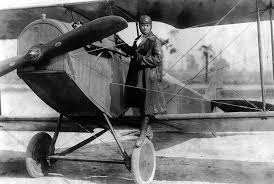 It is hard to overstate the fanatical popularity of aviation at that time. Think of the aforementioned Lindbergh and Earhart, how eighty years later their names are still spoken in reverent tones. When Bessie came back in 1922 it was with rock star status. She thrilled air shows with her flamboyant style of barnstorming, firmly ranking her as one of the greatest pilots in the world.

While her skills made her a legend, her legacy lives in her inspiration. Coleman was devoted to combating racism, refusing to perform where blacks were not allowed. She once walked away from a lucrative role in a major motion picture, because it presented a derogatory image of African Americans. Bessie was also well known for her lectures in which she spoke to audiences across the country about aviation and creating opportunities for African Americans.

Bessie Coleman’s ultimate dream was to open a flight school of her own, but sadly it would not be realized. On April 30, 1926 Coleman and her mechanic William Wills were killed when her Curtiss JN-4 Jenny crashed during a test flight. She was only thirty-four years old.