On Cold Christmas Lane, near Thundridge, in Hertfordshire, there sits the ruins of an ancient church reputed to be one of the most haunted locations in southern England. Originally constructed in the year 1086 as part of the Hugh De Desmaisnil Estate, the church was deconsecrated and destroyed in 1853, leaving only the bell tower and graveyard. Popular belief holds that the church was demolished because of its unwholesome north-south alignment, thought to be associated with devil worship. While this was not uncommon in medieval times, modern churches prefer an east-west alignment. 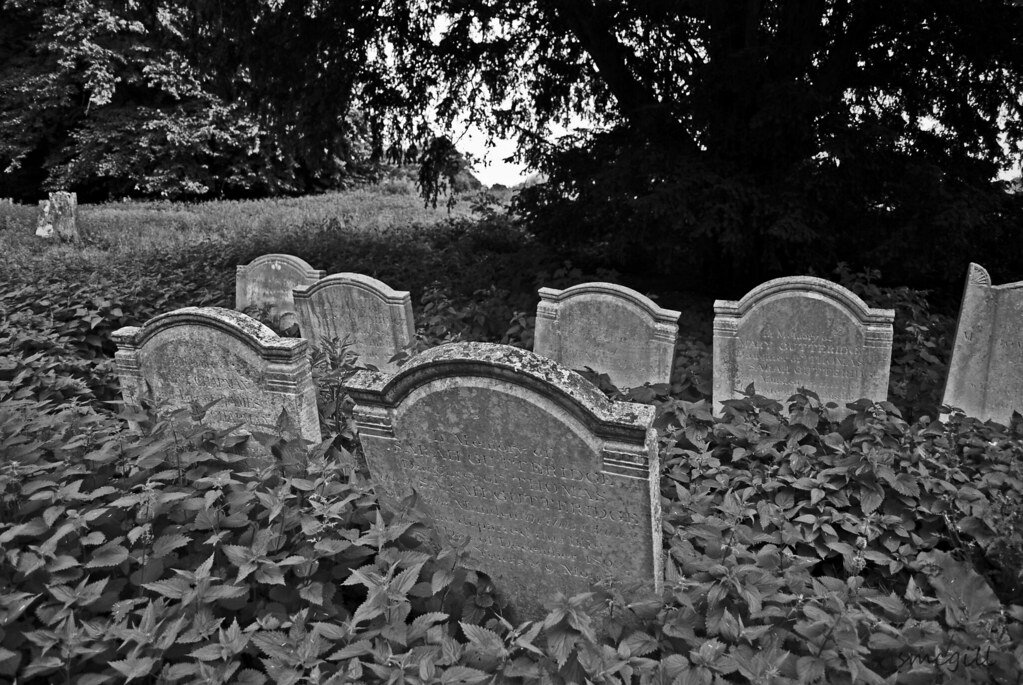 Originally named for St. Mary, the church is commonly known as Cold Christmas in remembrance of a legendary tragedy said to have occurred in the community. Though the exact date is unknown, it is said that a terrible storm came one Christmas in which many children froze to death. The children were interred in a mass grave under one of the church’s mausoleums. The cries of these children are among the numerous paranormal occurrences attributed to the church.

The graves have gone untended for generations and many of the markers are now covered with nettles, fallen, or are broken, the victims of time and vandals. Shadow figures are often reported mingling among them, often accompanied by the sound of growling. Those sensitive to such things report a heaviness and dread about the tower, which is also said to be rife with spirits. 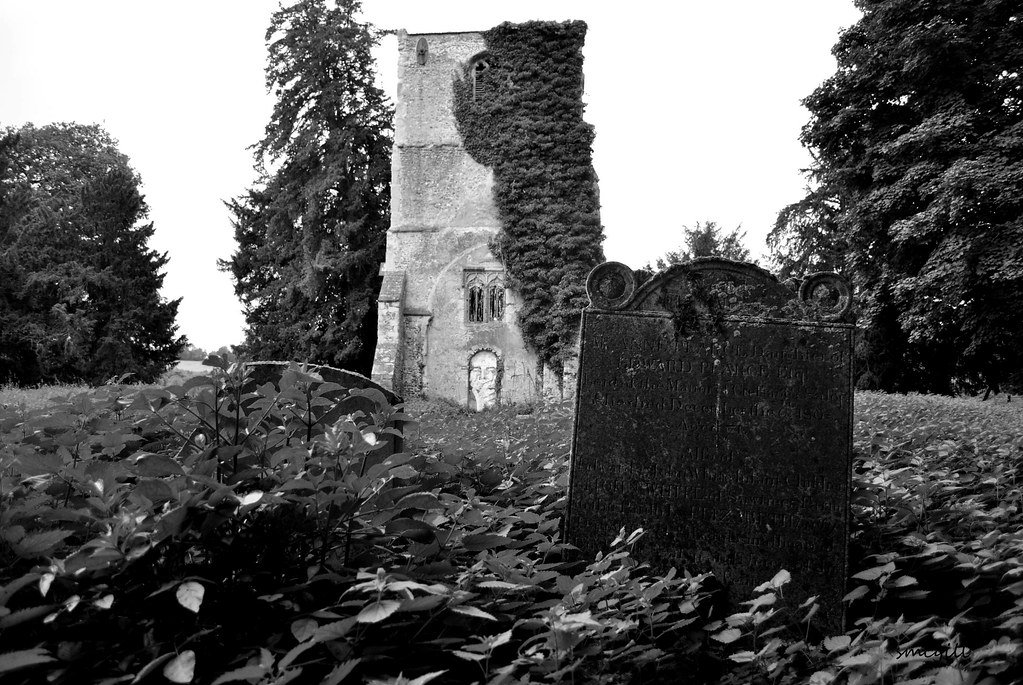 One of the lesser told, and more fantastic tales of Cold Christmas Church, is that of the Dragon Slayer, Sir Shonks. Piers Shonks was an 11th century knight who was conscripted by the lord of Brent Pelham to find and slay an evil wyrm that had taken up residence in the nearby town of Barkway. Sir Shonks tracked the beast, allegedly twenty-three feet tall, to its lair under a yew tree and engaged it in battle. The fight was long and bloody, but ultimately Shonks emerged victorious. However, in defeating the dragon, the poor knight earned the Devil’s ire. Satan vowed that, as punishment for slaying the beast, he would come for Shonks’ soul, “whether he be buried inside a church or out.” 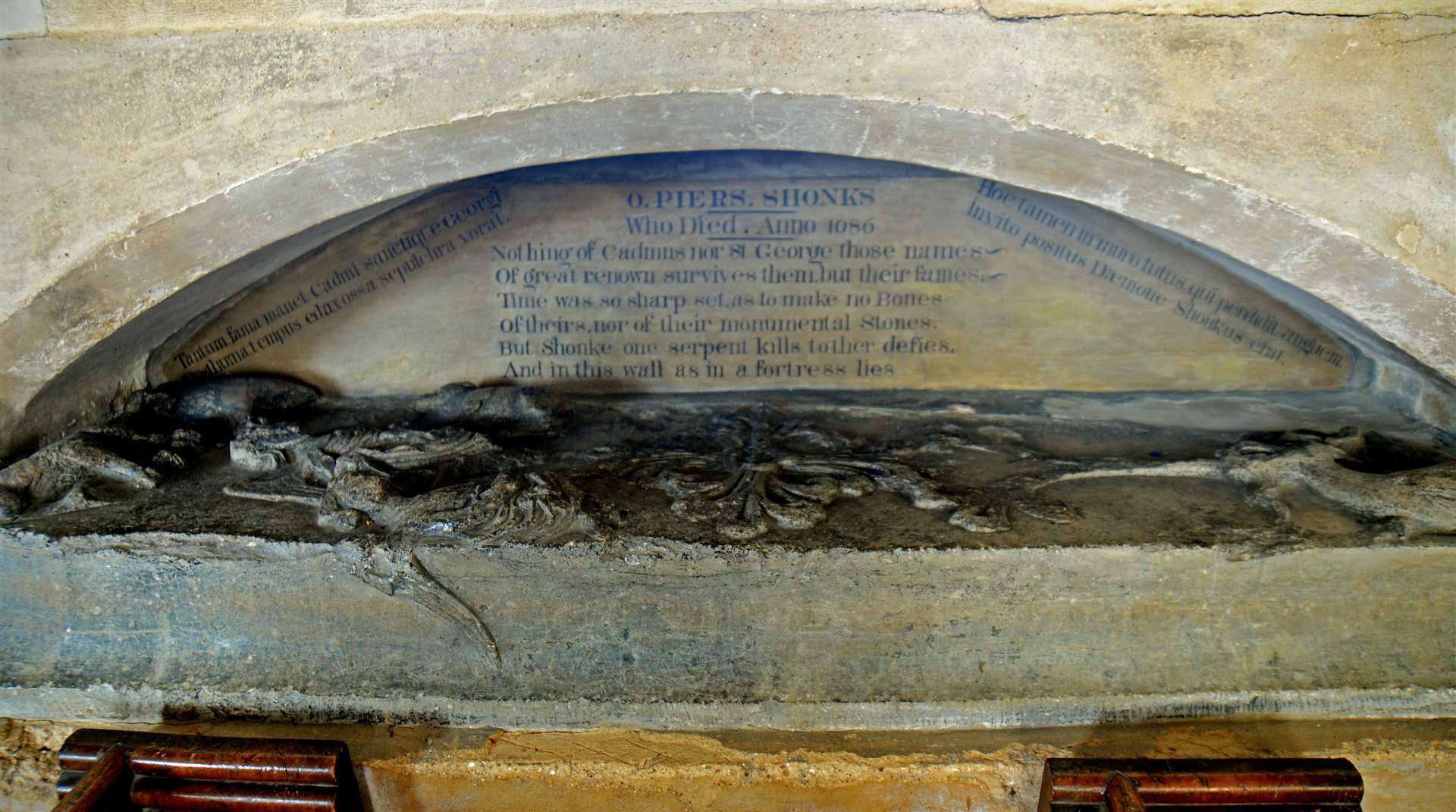 Shonks, it would appear, was a clever dragon slayer and proved a vexing target for Satan’s wrath. On his deathbed, the knight knocked an arrow in his bow and let it fly, declaring he would be buried where the arrow fell. The missile flew through the south window of the church and struck the north wall. Shonks was buried there in an alcove, neither in nor out of the church, thus denying Satan the pleasure of his soul.

In part his inscription reads:

And in this wall as in a fortress lies