The dead have their own highways, marked with coffin stones, lychgates, and monoliths. They course for miles in straight lines, undisturbed by the living, save when it is necessary to ferry mortal remains to their final rest. Otherwise, these roads are traveled only by luminous corpse candles, floating just off the ground, ranging between the churchyard and the homes of the recently deceased.

The origin of the Corpse Roads can be traced to medieval England at a time when a rise in population created intense competition among churches to retain and attract parishioners. This led to increased church building, including lucrative funerary services. As the distances between a church and its flock increased, certain amenities became necessary, such as Corpse Roads.

Belief of the day dictated that a straight path must be taken between the home of the deceased and the church yard, lest the spirit become lost. It is also necessary to travel with the feet pointing toward the destination, so that the individual is not tempted to return home. The fear of revenants, or returning spirits, was very real, requiring that certain precautionary measures be taken. Lychgates and bridges were common, as these man-made constructions cannot be navigated by the dead without guidance from the living. In Ireland, it is said that if an occupied coffin touches the ground for too long, fear gortach, or “hungry grass,” will grow, installing ravenous hunger in anyone who treads on it. For this purpose, coffin stones were installed at intervals along the path, so that those who couldn’t afford a carriage could set their burdens down and rest.

Corpse Roads were lonely places by necessity, requiring their construction to be clear of intersecting roads, farmland, or frequently used public spaces. Should they cross a field of crops or livestock, the plants would wither and the animals sicken. Typically, they would spoke outward from the churchyard toward the various towns or villages, well away from oft treaded paths. 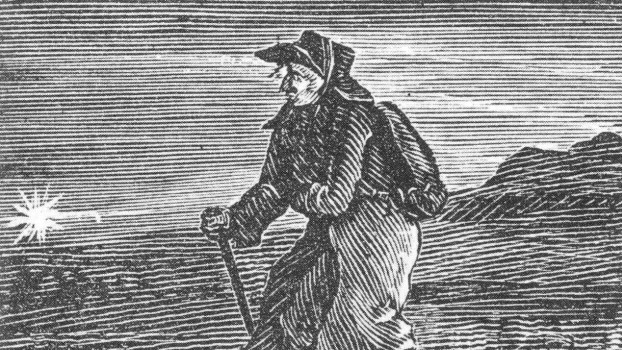 A closely related phenomenon is that of the corpse candles. They appear as pale blue, glowing lights that float just above the ground and travel in straight lines along the corpse roads. Most reports describe the lights as manifesting at the homes of the recently dead and following just behind or a bit ahead of the funeral procession, along the road and to the cemetery. Alternate versions maintain that the lights are omens, appearing above the homes of those who are soon to die or at the site of a grave that has yet to be dug.

Today, most of these roads have been lost to the centuries, but not to memory. Consider the folklore surrounding the Feast of Saint Mark. On the eve of the feast, April 24, between the hours of 11 pm and 1 am, it is tradition to hold a vigil, or watch, at churchyards or corpse roads. It’s said that at this time, the spirits of the recently departed can be seen making their ghostly procession down the road and to the cemetery.