In Swedish folklore there is a legend of a woman so clever and so wicked that she bested the Devil at his own work. Her name was Kitta Grau (Gray).

It is said that Kitta Grau was so evil that she was not fooled by the Devil’s disguises and even knew the fallen one by his true name. One day, she came across him wringing his hands in frustration outside the gate of one of her neighbors, a newly married couple. 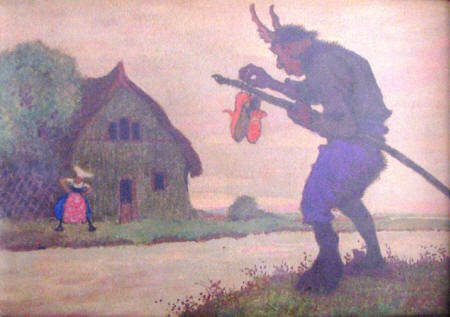 “What vexes you, dark one?” she asked.

“I’ve been trying to cause discord in this marriage, though it seems I’ve failed.”

“You’re a fool, I could see this easily done!”

“I’ll wager these beautiful shoes against your soul that you cannot!”

Kitta accepted the terms and went to work. First, she visited the wife and told her what a wonderful husband she had, perfect in nearly every way. There was only one piece of wickedness left in him, and it resided in the whiskers under his chin. She instructed her that she should shave that patch, if she truly wanted happiness.

Next, she went to the husband and told him what a beautiful wife he had, but, he should be warry because she was a murderess and planned to cut his throat while he slept. The man did not believe her until he woke one night to find her standing above him with a razor. The ensuing battle caused a riff between them and they divorced.

Astonished, the Devil delivered the shoes.

Later, Kitta came across a distressed merchant praying in his store. The merchant explained that he had made a bargain with the Devil in which he would be able to sell every piece of merchandise he bought within three weeks’ time. So far, the man had sold everything he’d bought quickly and easily. Soon, the Devil would come to claim his soul. 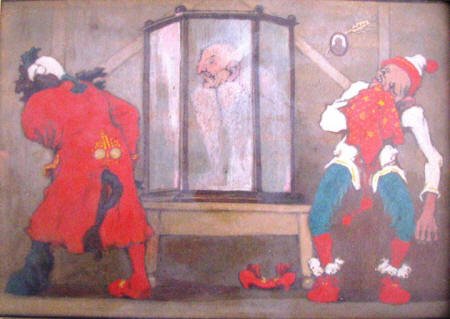 “I know something that no one would buy,” she said.

“Me,” she said. “Purchase me and I swear you will not be able to sell me again.”

The merchant agreed. She removed her clothes and they rolled her in mud, dung, and tar, then covered her in feathers. Afterwards, they placed her in a large cage outside the merchant’s store, advertising a reasonable price. After three weeks, not one person considered buying the curiously foul “bird” on display.

When the Devil returned to claim the merchant’s soul, he examined his inventory and discovered Kitta Grau to be the only item left for sale. Furious as he was, he acknowledged defeat and left the merchant in peace.