The Vanishing Boudoir of the Merchant’s Cafe

The darkened bricks of Pioneer Square are colored with the memories of a hundred and thirty years of Seattle history. Beneath its slanted sidewalks and cracked streets lay the remains of an even older city, the buried and forgotten Underground Seattle. After the destruction of the great fire of 1889, the old city was built over, with its street level buildings becoming either the basements of new structures or concealed beneath the new, raised roads. Now, these iconic brick buildings stand as custodians to that old world, each with its own secrets and dark stories to tell, and none more so than the Merchant’s Café and Saloon. 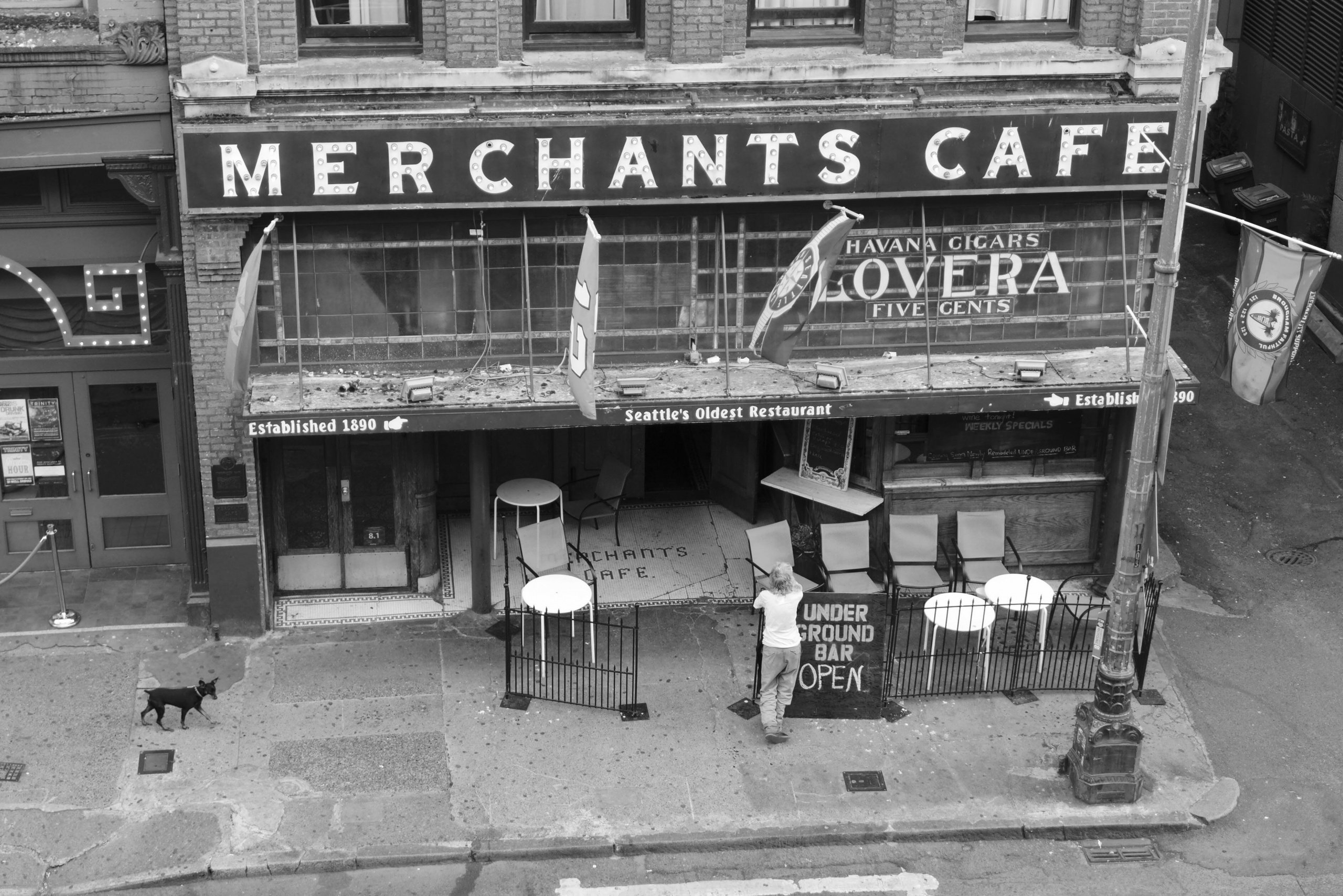 The Merchant’s Café opened in 1890 and saw Seattle through some of its most lawless and heady days. During the Klondike gold rush, its upper apartments were occupied by a brothel, serving the denizens of the original “skid road,” now known as Yesler Way. Currently, it is the city’s oldest continuously operated restaurant and one of Seattle’s most famously haunted locations. 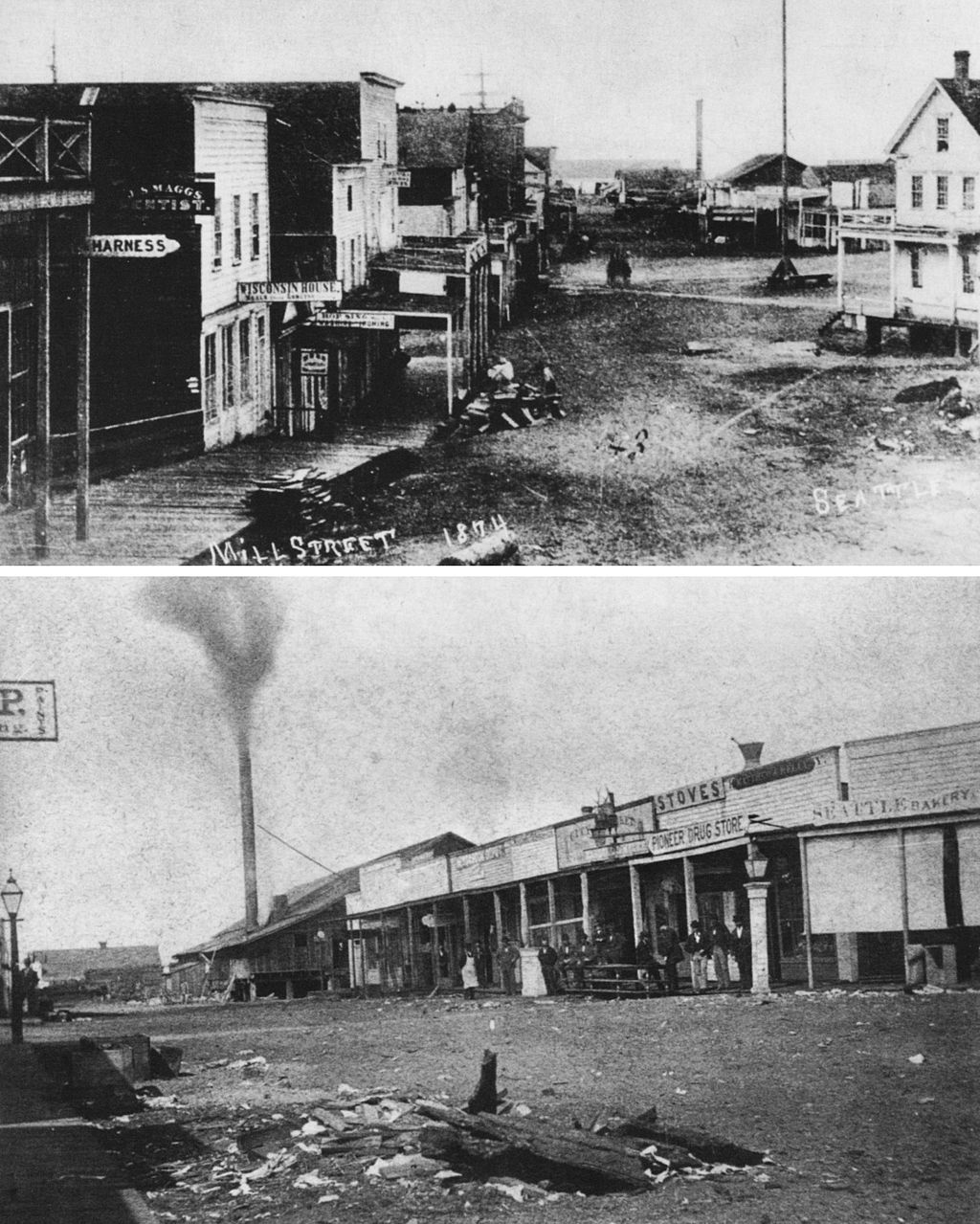 I will not linger too long on its haunted history, as many of these stories have been documented elsewhere, notably by the Dead Files and When Ghosts Attack. Some of the more dramatic activity includes staff members getting pushed down the stairs, hair pulling, kitchen utensils being thrown, and items vanishing only to be found relocated in odd places. On one occasion, an entire wine rack was mysteriously and violently torn from the wall, which was caught on a surveillance camera after hours. One of the more popular spirits is that of a little girl who is known to get upset if her doll is mistreated. 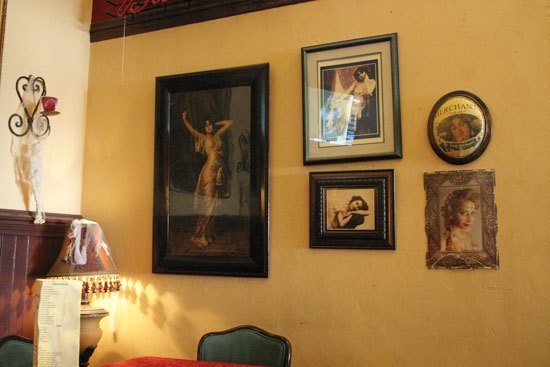 In 2011, a good friend and former co-worker, purchased the Merchant’s Café. She took a restorative approach to the remodel, embracing the historic vibe. Other than a few additions, like a pair of vintage Tiffany chandeliers, she kept as much of the interior authentic and original as possible. Among the many pieces of art adorning the walls, there was an antique lithograph that she was particularly enamored with. It featured a woman in a silk gown, standing on an oriental rug, with a black background. She decided that she wanted to incorporate it into her rebranding, so she took it down and snapped a few photographs of it.

This is where the story gets weird. Instead of capturing the image as it exists, some strange anomalies manifested in her photos. A surreal scene unfolded behind the woman in the picture. Where once there was only a jet-black background, a watery bedroom scene could be observed. While somewhat abstract, a vanity can be clearly identified, some shelving with objects, and an oddly warped ladder. Further, the rug, visible in the original, seems to blend into the boudoir scene. The background is clearly not the same artistic style or quality as the woman, though they somehow work together. 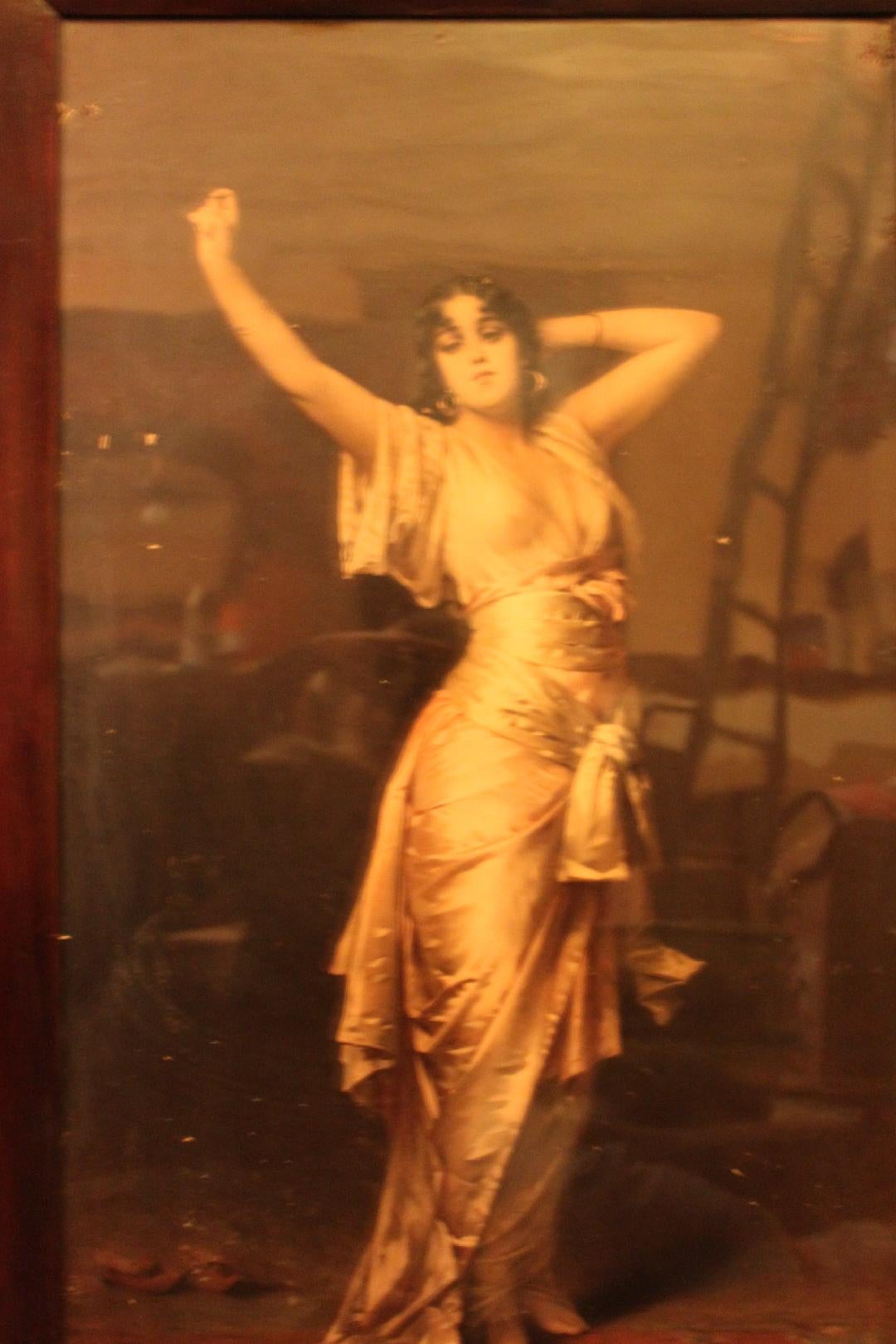 After several attempts produced the same results, her first thought was that a reflection of the room was somehow washing out the image. Indeed, this is far and away the most common explanation offered by anyone when presented with the evidence. I can assure you, this is definitively not the case. Photos have been taken from different angles, in different parts of the room, and with different cameras, all producing similar results. Another problem with this theory is that absolutely nothing in the room even remotely resembles the ghost image. Perhaps most conclusively, you can see the actual reflection of the photographer and room in the glass of the frame, and it is definitively different in substance and feel to the layer in question. In short, it is not a reflection.

This is about the time I personally became involved with the story. Ruling out reflections, I thought perhaps this was just a background image covered over by the artist. Removing the picture from its frame, it proved to be a print and not an original work. Another thought was that perhaps it was double printed with another image. This, while technically still possible, does not seem to be the case. The back shows no abnormal saturation, neither do some damaged areas where cross sections of the paper can be seen. 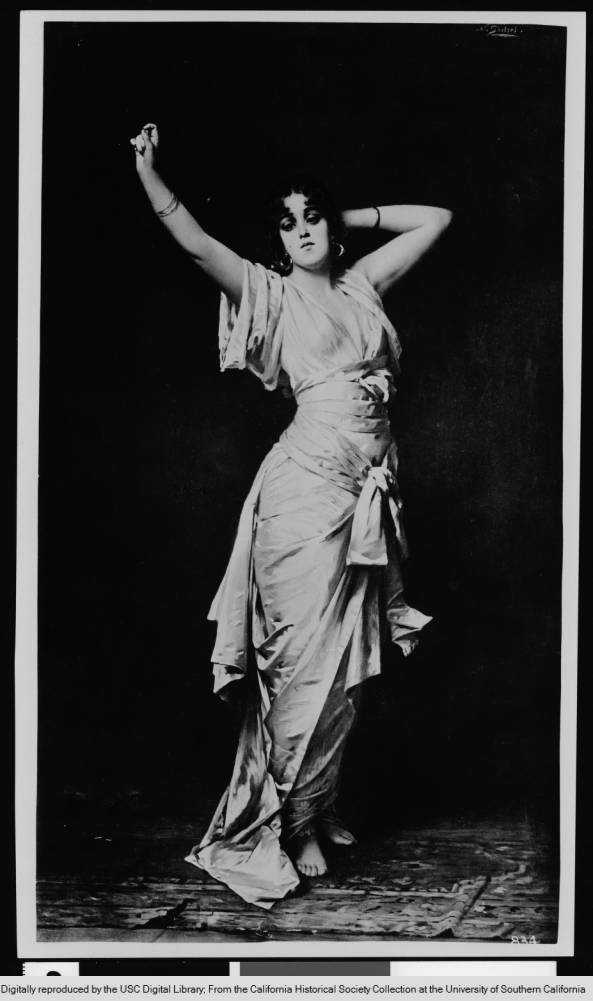 Not willing to abandon the theory that this latent image was somehow part of the original artist’s vision, I did some research on Nathaldi Siehel. The only references to Siehel I could find were in the USC digital library, where three of his paintings, including the one in question, “Oriental Dancing Girl” were documented. Interestingly, they were categorized by another artist, a California photographer, Charles C. Pierce (1860-1946). This opens another rabbit hole, as the bulk of Pierce’s work is city scenes and landscapes, not pictures of paintings. In any case, the original art was there to see and it did not include the dreamy background of the Merchant’s print.

Coming to a dead end, I reached out to a friend of mine at the Metropolitan Museum of Art in New York who works in art restoration. I presented him with the evidence and asked him to run it by his colleagues. Unfortunately, he could not shed any further light on the problem. It is of course possible to have hidden layers in artwork, it happens frequently in paintings, however, it is not possible for a print of a painting to contain any hidden layers that were not already visible to the naked eye, let alone a photograph of a print.

Again, another dead end. The final clue is perhaps the strangest of all. After several months, this phenomenon suddenly ceased. Perhaps, if my earlier theory was correct that there was a latent image contained below the print, than maybe continued exposure to flash photography somehow damaged or destroyed it? I find this to be an unlikely resolution, most of the photographs taken were with cell phones, not using flash. Still, it is the closest thing to a scientific explanation that I have. 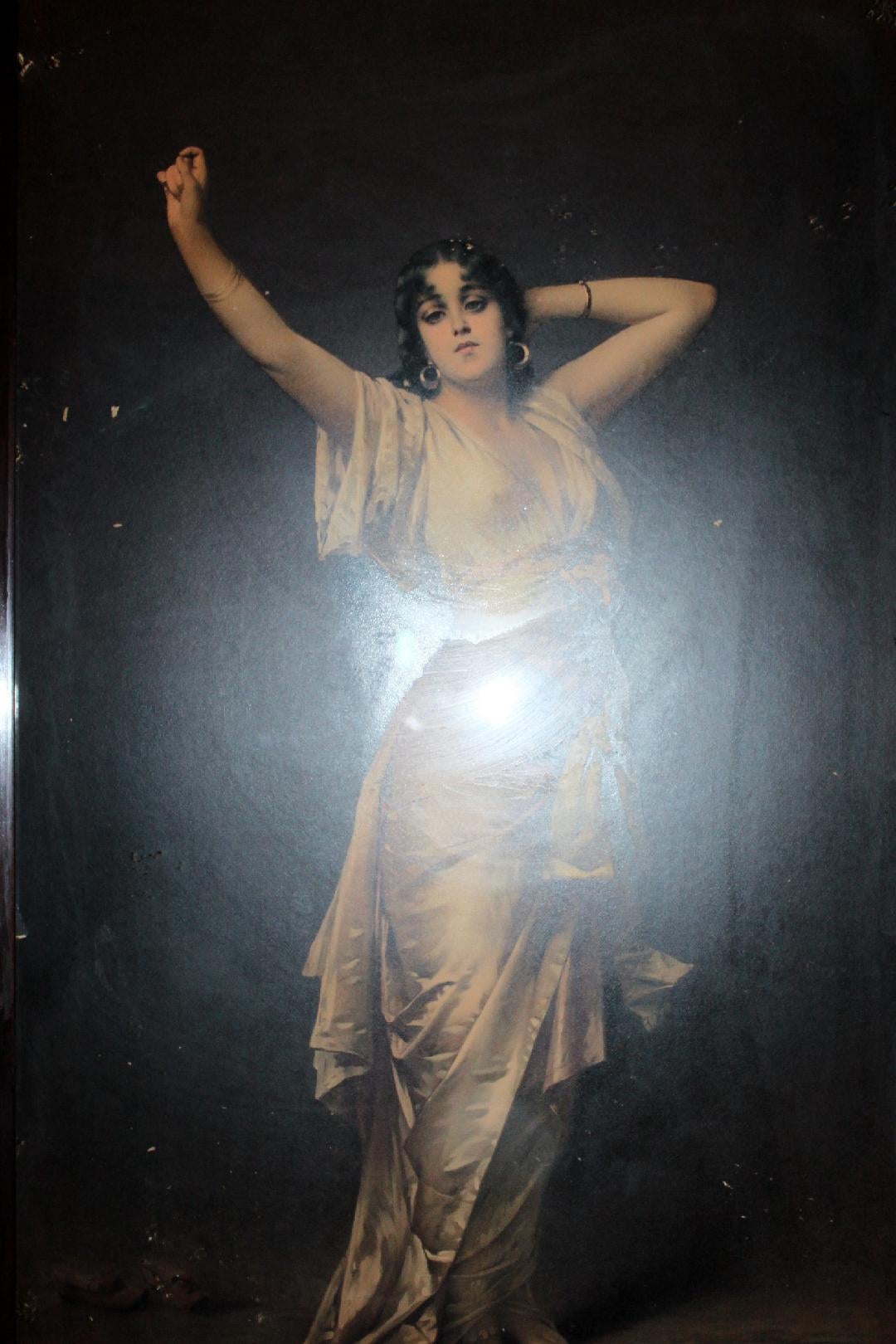 Consider yourselves invited to develop your own hypothesis, I would love to hear them. Where did this phantom boudoir come from and where did it go? Is it some ghostly window into the past, perhaps one of the bordello rooms from the Klondike days? Considering the Merchant’s paranormal reputation, the mystery only deepens.