Before the events of April 23, 1874, Thomas B. Clarke considered himself a skeptic of the Spiritualist movement and of all things supernatural or paranormal. A short three days later, he found himself an ardent believer, confessing to all that would hear him of the horrors he had witnessed. The impetus for his sudden change of heart is an entity known as the Oakland Ghost.

Thomas Clarke was a United States Treasury Officer at the Sub-Treasury in Oakland. By all accounts he was sane, rational, and well-respected by the community. He lived with his wife, daughter, and young son, along with three boarders in a nine-room mansion that he leased on Castro Street. The Clarke Mansion, built some years before, had never been the scene of any murder, violent crime, nor any other event that could be said to inspire the paranormal. Further, none residing there ever witnessed or experienced anything paranormal within the mansion or elsewhere. Such is the backdrop over which the events of April 23-26th unfolded. 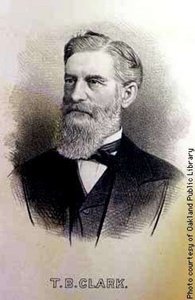 It began about 11:30 p.m. on the night of the 23rd. Most of the house had retired for the evening when the doorbell began ringing incessantly and there was a violent knocking at the door. Clarke and one of his boarders investigated and found no one there. As they stood at the stoop, believing that it was the work of some mischievous children, a large bang was heard at the top of the stairs. Investigating, a full basket of silverware levitated off a table and flew at them down the stairs. Soon after, a chair came spinning across the dinning room. The activity intensified, with multiple chairs being tossed, along with a steamer chest, a sofa, and many other objects, continuing well into the morning. At about 3:00 a.m., exhausted from their ordeal, they attempted to return to bed. An intense bang shook the house, rousing them from their beds once more to investigate. It was then that they discovered the front door to the house had been removed from its hinges and lay leaning against the parlor wall.

The next day, the occupants went about the normal functions of their day, albeit somewhat unsettled by the previous night’s activity. Several members of the household shared their experiences with acquaintances, and the news began to spread across town. These rumors reached a reporter at the Daily Alta California, who sought out Clarke for an interview and subsequently published an article about the events. 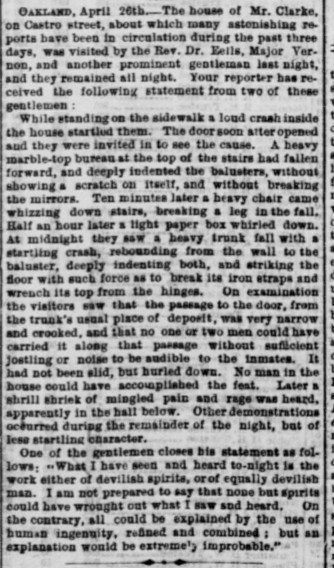 Later that evening, several friends of the family and the boarders investigated the strange evidence left from the previous night. Soon, the activity began again. Chairs and furniture flew randomly about the house, a pair of gloves filled themselves with ghostly hands, and a piano played on its own while its wood bent and warped around it. This activity was witnessed by all of the residents and their guests.

On the third day, word of the devilish manifestations had spread through the town, aided greatly by the article published in the Daily Alta California. As many as five hundred people gathered outside the mansion that night to catch a glimpse of the ghost, and it did not disappoint.

The seven members of the household and several of their guests were again assailed with a violent display of paranormal force. Heavy chests, bureaus, armoires, and furniture were lifted and moved. Chairs, books, and personal items were tossed all over the house. The activity was so pronounced that it could be heard on the street by the spectators, inspiring a group of five men to come up to the house and convince Clarke to let them bear witness in person. 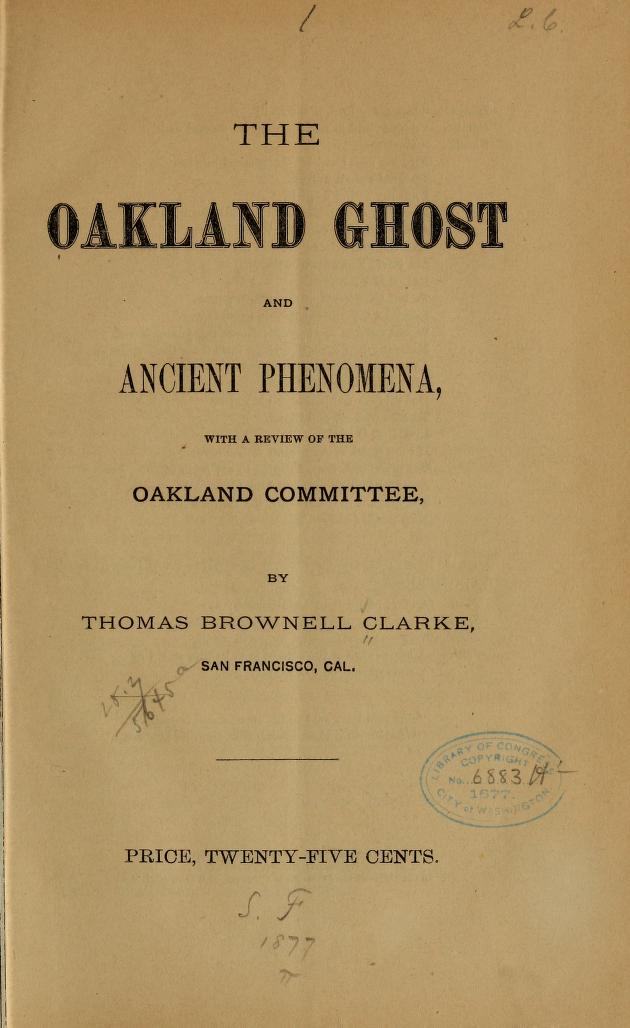 Again, the activity went deep into the night, culminating with a terrifying, female scream that could be heard in all rooms of the house. Clarke’s daughter claimed to have seen the face of the spirit and was profoundly disturbed by the experience. After this horrific climax, the house went quiet and, according to all those involved, it was the end of the paranormal activity at the Clarke Mansion.

Afterward, a twenty-member research team was assembled and descended upon the mansion. After a thorough investigation, the panel concluded that there was nothing supernatural or paranormal afflicting the property and that the events in April were most likely a hoax perpetrated by Clarke, his family, or his boarders.

Clarke was beyond irate at the team’s findings. So much so that he wrote a 20-page pamphlet debunking the investigators and their methods, as well as a 50-page, first person account of the events. Despite several more newspaper articles, opinions remained divided regarding the authenticity of Clarke’s claims. To Clarke’s credit, dozens of witnesses observed the events, including highly credible individuals such as an Army colonel, a bank officer, a reverend, a schoolteacher, and other professionals. The panel dismissed this fact, implying that merely fell victim to Clarke’s hoax.

Thomas Clarke and his family left Oakland not long after, though he was permanently changed by the events. In 1877, with the help of a spiritual medium, Clarke claims to have contacted George and Martha Washington in the afterlife and convinced their ghosts to write several books. He went to his grave swearing that the events of Clarke Mansion were true. 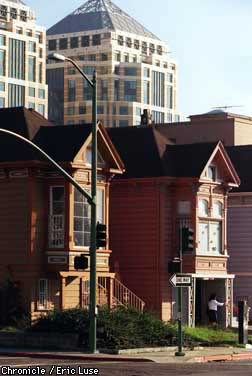 After his death, his daughter Helen continued to tell her account of the Oakland Ghost. After appearing in several publications, the American Society for Psychical Research published their conclusions in a 1913 report titled “A case of Poltergeist.” Despite the abundance of witnesses and sworn affidavits, the findings were, again, inconclusive.

In the wake of the Clarke family, it is reported that the mansion remained uninhabited until the early 1970s when it was torn down to make room for the construction of I-980 freeway. Oddly enough, three Victorian era houses remain at 17th and Castro, near where the Clarke Mansion once stood. The residents frequently report the visitation of a female spirit with a terrifying cry who, on occasion, can be seen wandering the street, where a certain house once stood.