December 1st marks the seventy-third anniversary of the discovery of the Somerton Man, also known as the Tamam Shud Case. This infamous cold case has inspired decades of research and speculation and ranks as one of history’s greatest unsolved mysteries. Now, after more than seven decades, are we finally on the cusp of discovering the truth?

This case is a rabbit hole, there’s no way around it. That said, it’s also a very well documented one, so I’m going to keep my description of the events and evidence to broad strokes with an eye toward the current investigation and discoveries. 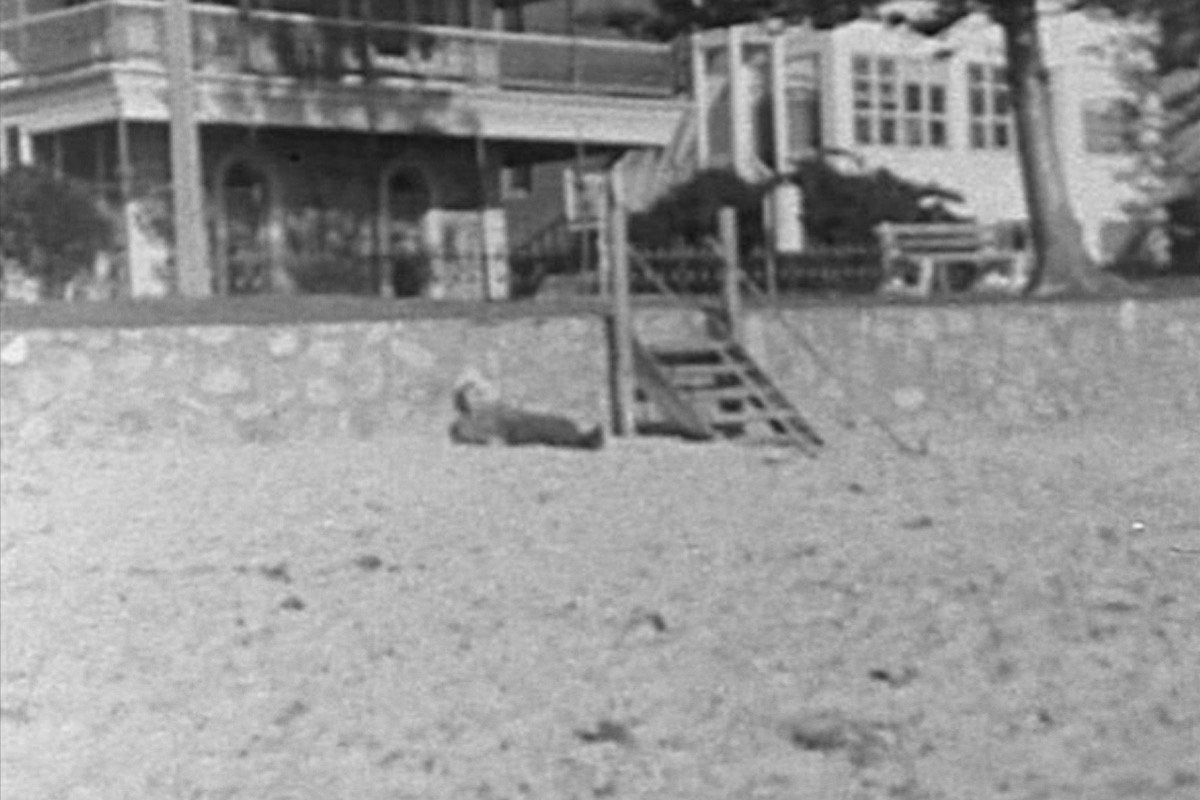 At just after 6am on December 1, 1948, the body of a man was found laying on the beach at Somerton Park, about seven miles south-west of Adelaide, Australia. He was laying with his head resting against the sea wall and his legs stretched out and crossed as if he were sleeping. Witnesses report seeing the man as early as 7pm the night before, with at least one claiming that they saw him moving. In his pockets they found a pack of cigarettes that contained 7 cigarettes of a different brand, a pack of juicy fruit gum, half a box of matches, a comb, and an unused rail ticket from Adelaide to Henley Beach. He carried no wallet, nor any form of identification.

He wore a white shirt, tie, brown knitted pullover, brown pants, and brown socks and shoes. His jacket was a fashionable double-breasted design, black and grey, and of “American” tailoring style. Most notably, the labels had all been cut from his clothing. The pathologist on scene described him as a “Britisher” in appearance, clean-shaven, 5-foot-11, with fair to ginger hair that greyed at the temples. He estimated his age at 40-45, citing that he was in “top physical condition.” 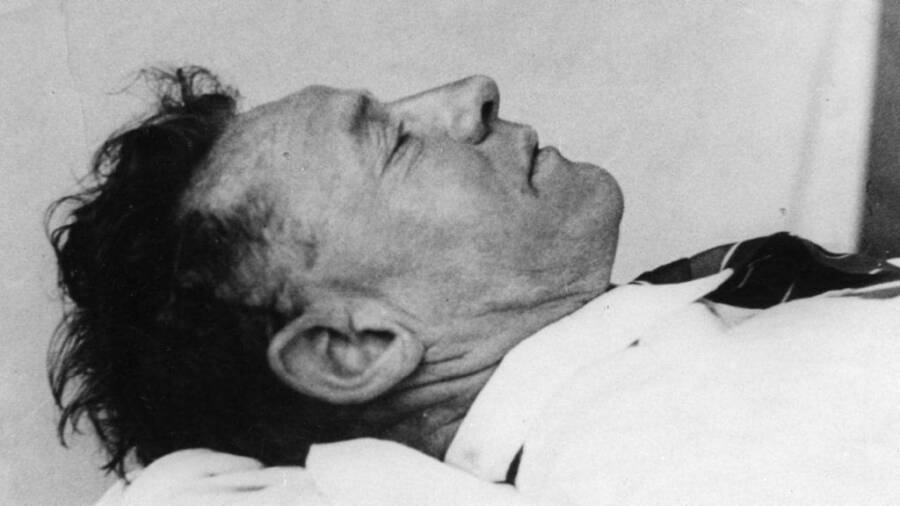 An autopsy was performed, suggesting that the man had likely died around 2am on December 1. No cause of death could conclusively be diagnosed, though the evidence strongly suggested poisoning. Further, if poisoning was the cause, the agent itself was undetected. A second pathologist, during the inquest suggested digitalis (foxglove) or ouabain, a traditional east African arrow poison, as being the most likely poisons employed. Both would be undetectable in the autopsy.

The first break in the case came on January 14, when staff at the Adelaide train station discovered a suitcase without a tag that had been checked in on November 30, believed to belong to the John Doe. The case contained more clothing, mostly with the labels removed, though 3 tags were present with the name T. Keane written on them. Additionally, there was an electrician’s screwdriver, a table knife sharpened into a shiv, a stenciling brush, and a sharpened pair of scissors. A spool of thread, unavailable in Australia was also found, further suggesting he was a foreigner. These items were scrutinized at nauseum, though ultimately provided no further clues. The name T. Kean was eventually dismissed as the man’s identity, as there proved to be no one missing with that name. 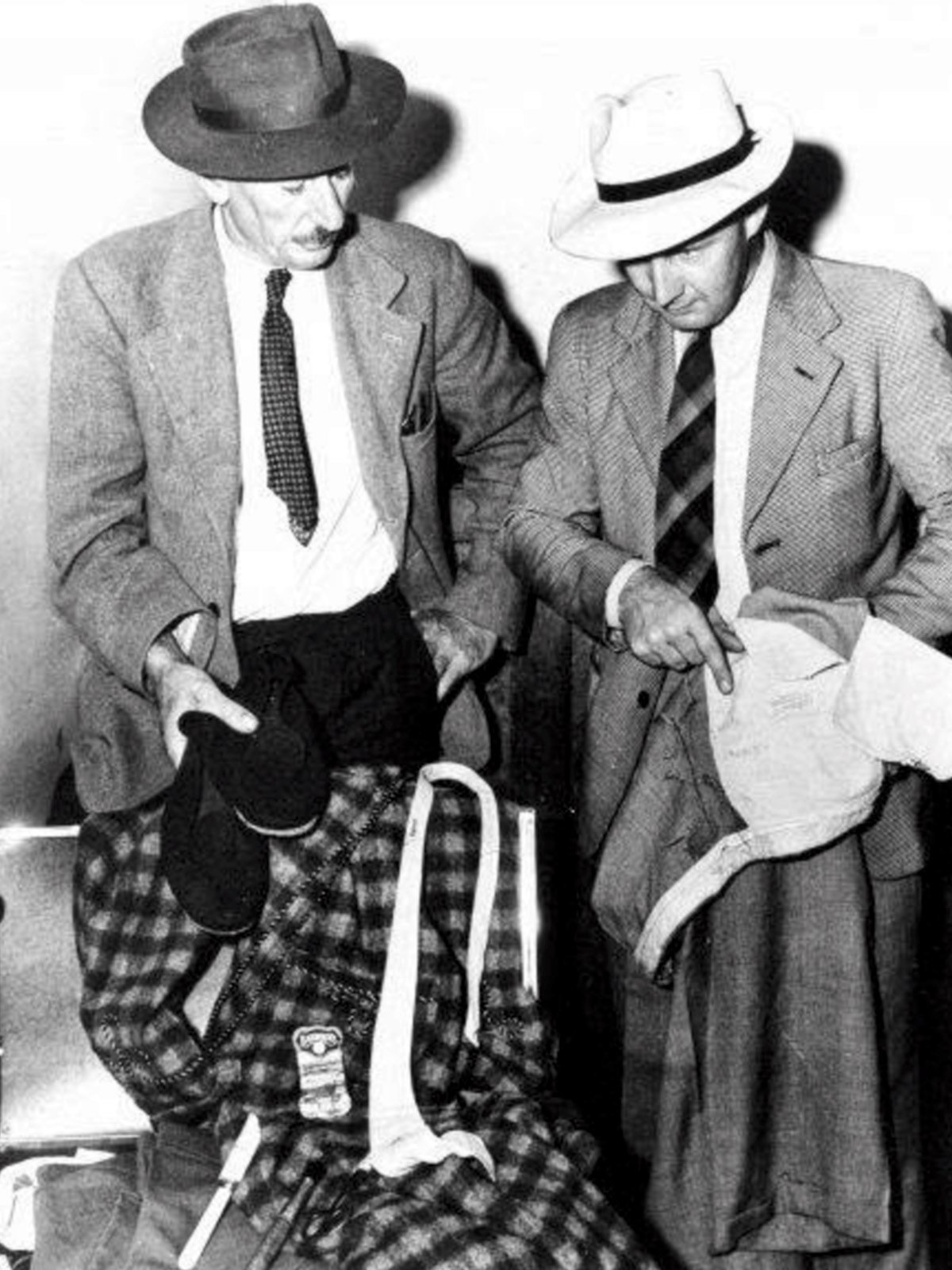 It is worth noting the significance of the missing clothing tags as it has often been discussed and cited in various theories. In short, the suggestion is that if someone were trying to conceal the identity of a body, cutting off the labels of their clothing would obscure the manufacturer and where they might have been acquired. It’s a common trope in spy novels. At the time, war rationing was still in effect and clothing was not as easy to come by, thus secondhand clothing was common. It was also a common practice to write one’s name on their clothing to make it readily identifiable for laundry services. So, it would not be surprising at all to find clothes with tags removed to remove the name of the former owner. This certainly doesn’t eliminate the possibility of some intentional subterfuge, though it’s just not as strange as we might think from a modern perspective. 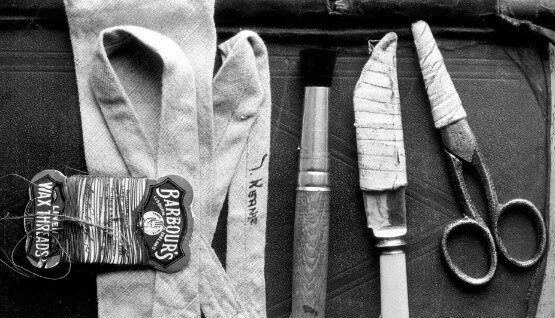 Now, here’s where the case gets weird. During the inquest, a small scrap of paper was found sewn into the fob pocket of the man’s trousers with the words “Tamam Shud” printed on it. The phrase is Persian, meaning “ended” or “It is finished” and can be found on the last page of the Rubaiyat of Omar Khayyam, an eleventh century work of poetry. Police immediately made a public appeal to locate the book from which the scrap was torn, and remarkably enough, someone had found it!

The book was a 1941 edition of Edward FitzGerald’s 1859 translation found in the back seat of a car parked just down the street from where the body was located. Unfortunately, some controversy exists about the exact timing of the discovery. One report cites the day after the body was discovered, the other states that it was a week earlier. The original witness that came forward is anonymous and that detail may be lost in time. The ramifications are huge. All evidence to that point had the man arriving in Somerton November 30, if the book were discovered a week earlier it opens a wormy can of theories, which we will soon touch on. 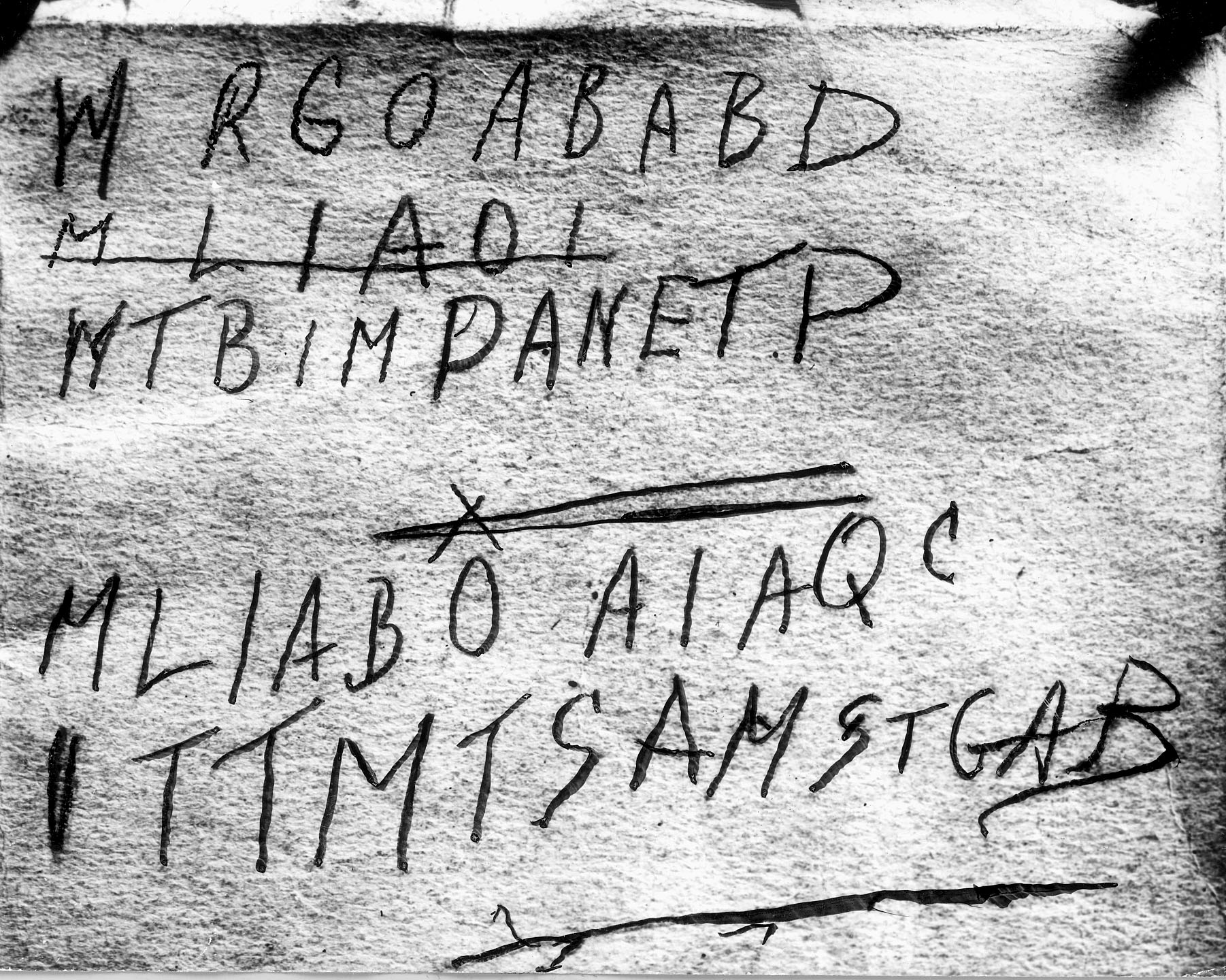 On the back page of the book police discovered a handwritten, coded message. The message consists of five lines of text, all capital letters, with the second line crossed out. I will forego any detailed analysis of the cypher here, as that is another rabbit hole altogether. Also found in the back of the book was a phone number belonging to a woman named Jessica Thompson. Adding a deeper layer to the onion, she lived a mere 400 meters from where the body was discovered.

Jessica “Jestyn” Thompson, born Jessica Harkness, denied any knowledge of the man found on Somerton Beach, nor did she have any clue how her phone number could have turned up in the dead man’s book. She mentioned that a unidentified man confronted one of her neighbors asking about her earlier in 1948, it is unknown whether this was confirmed by the police. When asked about the Rubaiyat, Mrs. Thompson admitted to being familiar with the book, even owning a copy of it, which she gave to a man named Alf Boxall, whom she had a relationship with during the war in 1945. She claimed she had not seen the man since, though he did write to her in 1948. She responded that she had been recently married (to Prosper Thompson) and that is the last she heard of him. 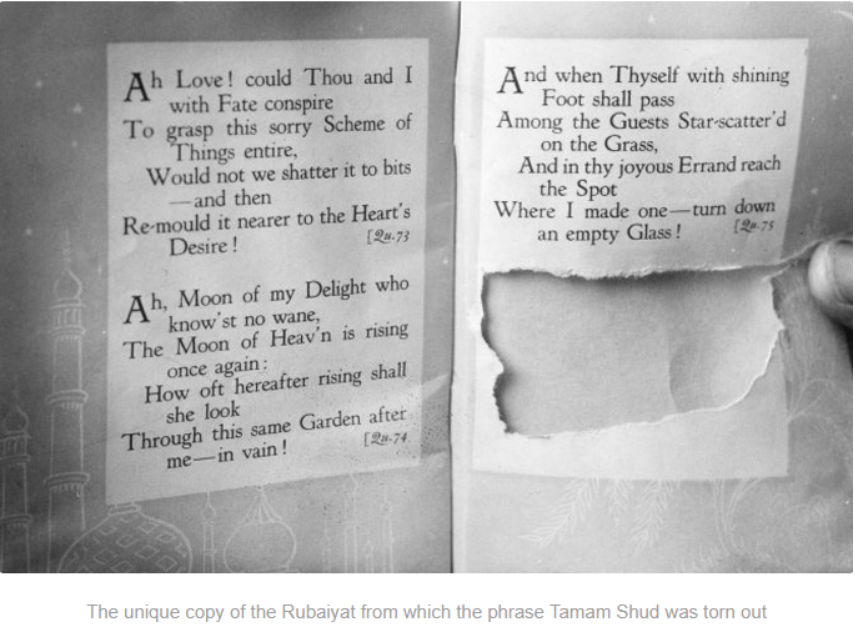 Naturally, Alf Boxall became a leading candidate for Somerton Man. However, this theory was quickly ended when they found Mr. Boxall alive and well, living in Sydney. Furthermore, he was still in possession of his copy of the Rubaiyat, which was intact including its final page with Tamam Shud clearly present. A dedication from “JEstyn” (sic) included verse 70:

Indeed, indeed, Repentance oft before
I swore—but was I sober when I swore?
And then and then came Spring, and Rose-in-hand
My thread-bare Penitence a-pieces tore

Many of the details of the original inquest have been lost over the years as have key pieces of evidence. It’s unknown how deeply the police pursued Jessica Thompson as a suspect, or what, if anything, they found to cross her off the list. What is known, is that she requested that her name be kept out of the press and remain anonymous, to which they complied. Because of this, later investigators lacked a crucial piece of the puzzle.

In part two, we will discuss theories, analysis, and later developments, that may finally help unravel the mystery.