We tend to take the sky above us for granted, hardly batting an eye at the blinking lights of airplanes or the streaking glow of satellites that traverse across the heavens. In fact, we are so accustomed to foreign objects soaring above us, that the stars can seem like the intruders. In those rare occasions, when we encounter something that defies identification, science is there to comfort us with rational explanations.

Human flight has only existed for a few generations, yet the historic record is filled with strange and unexplained aerial phenomenon. Certainly, some can be dismissed as natural events, such as a passing comet or a solar eclipse, others are more enigmatic. Consider the 1561 Nuremberg Celestial Phenomenon. 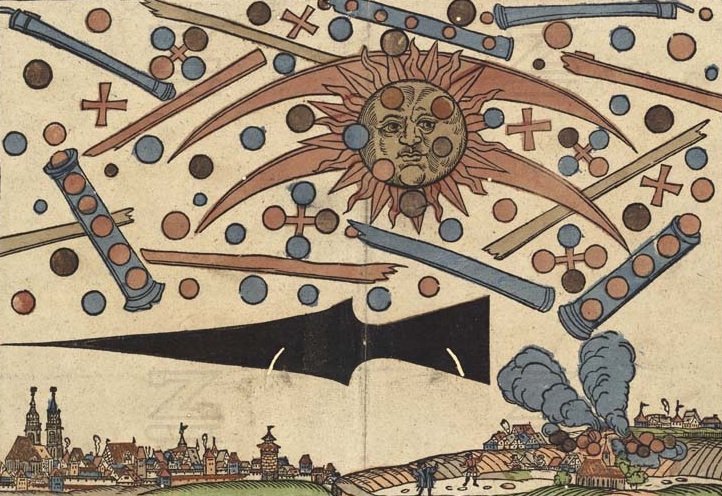 On April 14, 1561, just after dawn, a violent aerial battle ensued over the skies of Nuremberg, Germany. The event was witnessed by thousands and was well documented at the time. Modern investigators are quick to reference it as a UFO event, and it’s easy to see why. However, I think it is the witness accounts and speculation that is the most fascinating.

In the morning of April 14, 1561, at daybreak, between 4 and 5 a.m., a dreadful apparition occurred on the sun, and then this was seen in Nuremberg in the city, before the gates and in the country – by many men and women. At first there appeared in the middle of the sun two blood-red semi-circular arcs, just like the moon in its last quarter. And in the sun, above and below and on both sides, the color was blood, there stood a round ball of partly dull, partly black ferrous color. Likewise, there stood on both sides and as a torus about the sun such blood-red ones and other balls in large number, about three in a line and four in a square, also some alone. In between these globes there were visible a few blood-red crosses, between which there were blood-red strips, becoming thicker to the rear and in the front malleable like the rods of reed-grass, which were intermingled, among them two big rods, one on the right, the other to the left, and within the small and big rods there were three, also four and more globes. These all started to fight among themselves, so that the globes, which were first in the sun, flew out to the ones standing on both sides, thereafter, the globes standing outside the sun, in the small and large rods, flew into the sun. Besides the globes flew back and forth among themselves and fought vehemently with each other for over an hour. And when the conflict in and again out of the sun was most intense, they became fatigued to such an extent that they all, as said above, fell from the sun down upon the earth ‘as if they all burned’ and they then wasted away on the earth with immense smoke. After all this there was something like a black spear, very long and thick, sighted; the shaft pointed to the east, the point pointed west. Whatever such signs mean, God alone knows. Although we have seen, shortly one after another, many kinds of signs on the heaven, which are sent to us by the almighty God, to bring us to repentance, we still are, unfortunately, so ungrateful that we despise such high signs and miracles of God. Or we speak of them with ridicule and discard them to the wind, in order that God may send us a frightening punishment on account of our ungratefulness. After all, the God-fearing will by no means discard these signs, but will take it to heart as a warning of their merciful Father in heaven, will mend their lives and faithfully beg God, that He may avert His wrath, including the well-deserved punishment, on us, so that we may temporarily here and perpetually there, live as his children. For it, may God grant us his help, Amen. 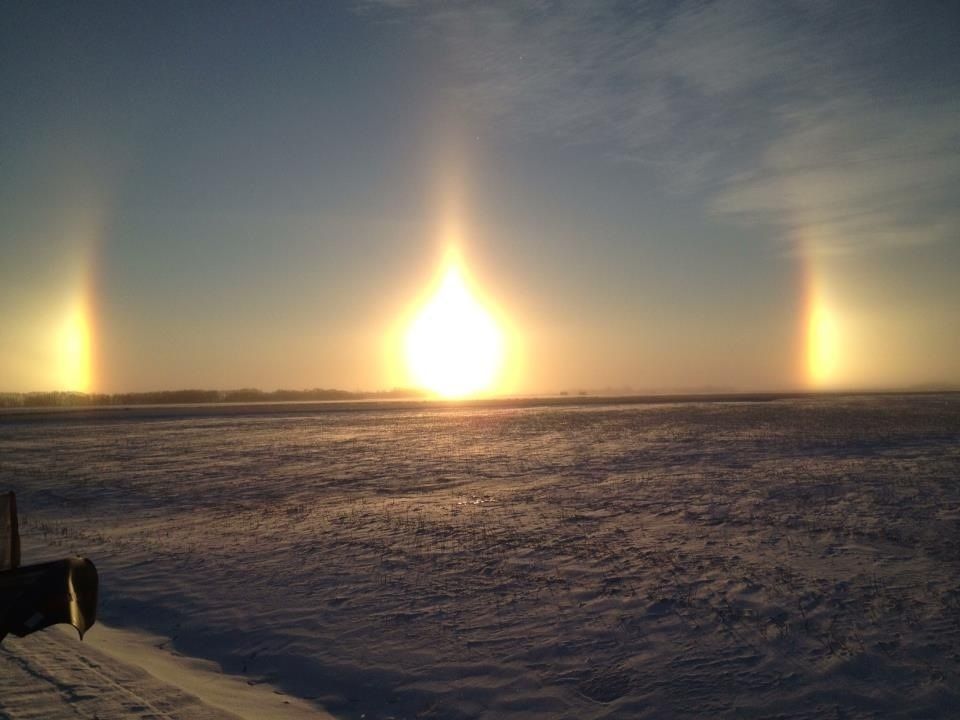 It certainly sounds like they are describing modern aerial combat, and there apparently were casualties. Some skeptics have suggested that what they most likely witnessed was a “sun dog,” a kind of optical solar phenomenon. Though, considering the detail described in the event, that hardly seems likely.

Interestingly, this is not a unique event. A similar event occurred on Good Friday, 1554, which was described as “Knights” fighting in the sky. Another series of events occurred in July of 1566, in Basel, Switzerland. They were recorded on a broadsheet, like the Nuremberg event, with a very similar narrative. 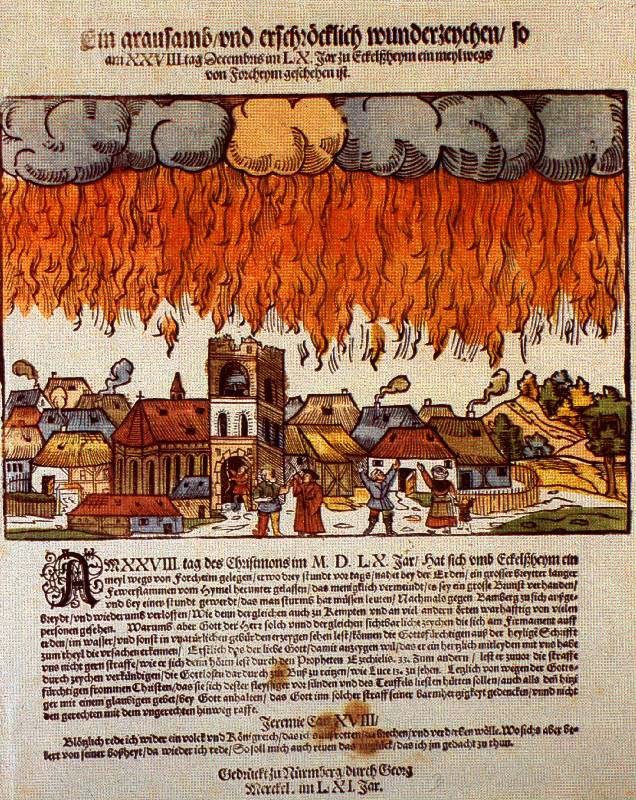 It happened in 1566 three times, on 27 and 28 of July, and on August 7, against the sunrise and sunset; we saw strange shapes in the sky above Basel.

During the year 1566, on the 27th of July, after the sun had shone warm on the clear, bright skies, and then around 9 pm, it suddenly took a different shape and color. First, the sun lost all its radiance and luster, and it was no bigger than the full moon, and finally it seemed to weep tears of blood and the air behind him went dark. And he was seen by all the people of the city and countryside. In much the same way also the moon, which has already been almost full and has shone through the night, assuming an almost blood-red color in the sky. The next day, Sunday, the sun rose at about six o’clock and slept with the same appearance it had when it was lying before. He lit the houses, streets and around as if everything was blood-red and fiery. At the dawn of August 7, we saw large black spheres coming and going with great speed and precipitation before the sun and chattered as if they led a fight. Many of them were fiery red and, soon crumbled and then extinguished 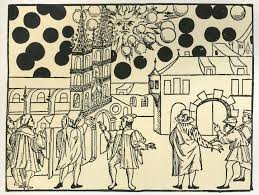 Skeptics take the position that our ancestors were idiots and that these were mere natural phenomenon mistaken for something fantastical. Conversely, ancient astronaut theorists present it as proof positive of extra-terrestrial visitation. Historically, man has tended to explain the unexplainable through the lens of the time in which they live. Whether it be fairies, dragons, gods, or flying saucers, human interpretation of the unknown is constantly evolving. Something was in the sky that day, that much is certain, even if we are no closer to understanding exactly what it was.