Over the centuries, London has had no shortage of nocturnal villains stalking its gloomy streets. Some were harmlessly conjured from folklore, while others were terrifyingly real. One phantom that straddled the line between myth and reality was the devilish Spring Heeled Jack.

His appearance was primarily human, excluding his burning red eyes, steel claws, and habitual exhaling of blue and white flames. He was said to be finely dressed, though underneath his gentlemanly attire witnesses claim he wore skin-tight white oilskin and a peculiar helmet that contributed to his Satan-like imagery. Most intriguing was his ability to leap over fences and even rooftops, hence earning the name “Spring Heeled.” 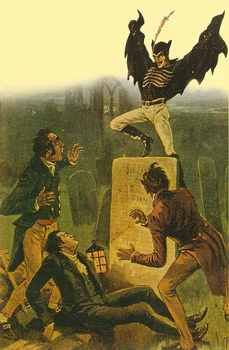 The first reported sighting of the fiend came in the fall of 1837. A young woman named Mary Stevens was walking home from work at night near Clapham Common when the steel clawed maniac leaped from a darkened alleyway and accosted her. He planted several kisses on her face and clawed at her clothing before her panicked screams drew the attention of neighbors. When help appeared, Jack bound away, disappearing swiftly into the night. The following night, another attack occurred in the same neighborhood with a similar result. This time, when the attacker fled, he jumped a great distance to the road into the path of an oncoming carriage, causing the driver to lose control and crash.

By January of 1838, incidents were mounting, causing the Mayor of London to take notice. Articles were published in the press and he had received a sizeable stack of letters complaining about the attacks. One anonymous letter writer wrote:

At one house the man rang the bell, and on the servant coming to open door, this worse than brute stood in no less dreadful figure than a spectre clad most perfectly. The consequence was that the poor girl immediately swooned, and has never from that moment been in her senses.

Probably the most documented and definitive accounts are those of Jane Alsop and Lucy Scales. In the case of Jane Alsop, she was summoned to the door of her father’s house the night of February 19, 1838, by someone knocking. The stranger claimed to be a policeman and asked Jane to bring a light as they had just caught Spring Heeled Jack on the street out front. When she returned with a candle, the man threw off his cloak to reveal his hideous red flame eyes and steel claws. He immediately belched blue and white flame and began clawing at her gown. Her screams brought assistance from her sister, chasing the attacker away. 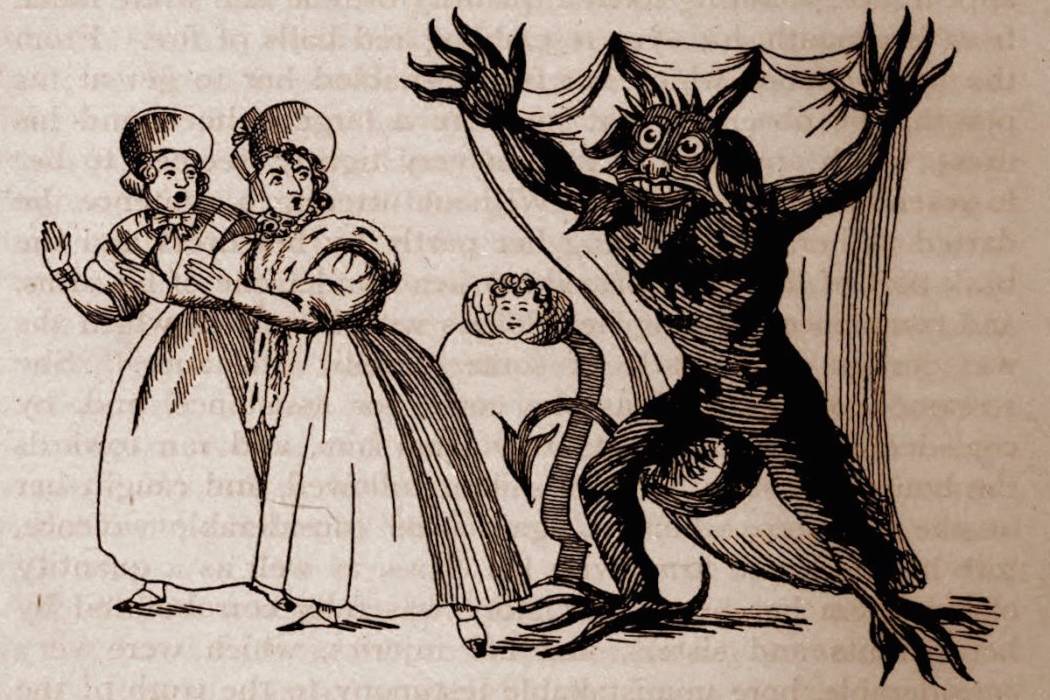 The sensation of these attacks brought on a wave of media attention and were adopted by the penny dreadfuls of the day. Though, as the notoriety increased and the story became legend, the incidents diminished in frequency and faded away. Another rash of sightings occurred in the early 1840s and again in the 1850s. Interestingly, he was named a suspect in the famous “Devil’s Footprints” incident in Devon in 1855. He appeared once again in the mid-1870s near Aldershot, though this seems more likely to be a copycat as these manifestations differ wildly in substance from the earlier sightings. That is, of course, if we are assuming a human perpetrator. Old Jack made a few final appearances haunting rooftops or standing menacingly on lonely dark streets before finally fading into legend around the turn of the century.