Everyone wants to live forever and science has long endeavored to deliver that immortality, staying one step ahead of our imagination in their search for the fountain of youth. For Serge Voronoff, the answer to this age old mystery of immortality was simple, transplant chimpanzee testicles into humans. 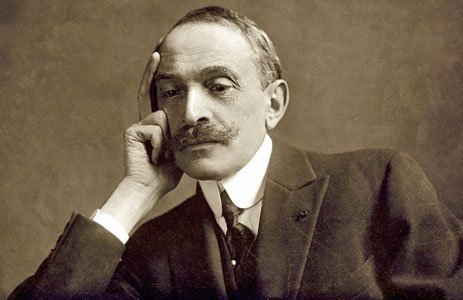 Serge Voronoff was born in Russia in 1866. After graduating secondary school in Voronezh where he studied medicine, he emigrated to France. There he studied under famed Noble Prize winning surgeon and Eugenicist, Alexis Carrel. It was from Carrel that Voronoff learned surgical techniques for transplantation and likely developed his unhealthy fascination with xenotransplantation. In 1895 he relocated to Egypt, where he spent the next 15 years studying the effects of castration on Eunuchs, which was formative in his study of rejuvenation.

In 1899, Voronoff began his experimentation with glandular transplantation in earnest, taking up after the research of Charles-Eduard Brown-Sequard, who famously ground up dog and guinea pig testicles and injected them under his skin. He began with the thyroid glands of chimpanzees, transplanting them into humans that suffered from thyroid deficiencies. Somehow, the results proved promising enough to encourage copious amounts of financial backing by among others, millionaire Evelyn Bostwick, of the famed Bostwick family, whom he later married. 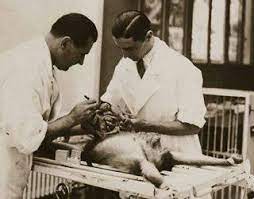 The next phase of Voronoff’s experiments, by modern sensibilities, would be better suited in the script of a horror movie than a medical journal. Around 1917 he began harvesting the testicles from condemned and executed prison inmates and transplanting them into the scrotums of his wealthy clients. Soon the demand for virile, criminal testicles far exceeded the supply. Voronoff then opted for the next best thing, chimpanzee testicles.

Voronoff completed his first chimpanzee to human transplant on June 12, 1920. The procedure involved grafting a several millimeter thick slice of chimp testicle to the human hosts existing testicle. According to Voronoff, the operation was a rousing success. As news of the transplant spread, wealthy and impotent men from around the world began to cue up for their chance to receive a monkey gland.

In 1921, his wife died, leaving him a small fortune. Now, flush with resources and an unlimited supply of rich candidates, Voronoff was able to set up clinics in Paris and Algiers. By 1926 his clients numbered in the thousands. He was gaining world-wide notoriety, both in the public and scientific communities, earning him the unusual moniker of the “Monkey Gland Man.” 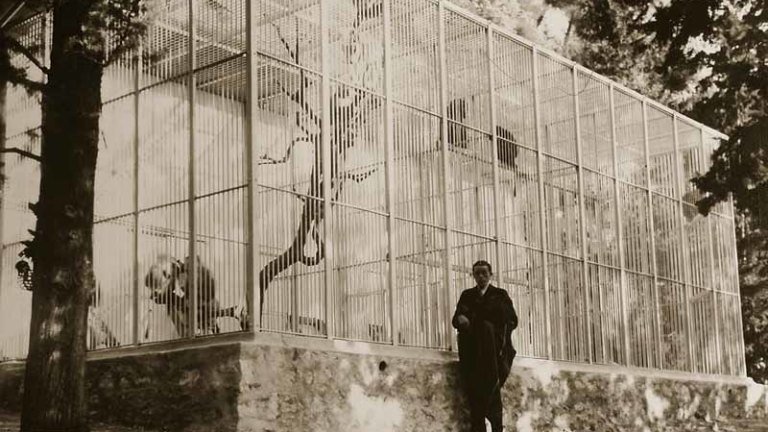 Voronoff’s research also crossed over into the study of female biology, though instead of testicular transplants, it was Chimpanzee ovaries that he chose to swap. He even went as far to transplant human ovaries into a chimpanzee, attempting to inseminate the animal with human sperm. While in a parallel universe this no doubt preceded the Planet of the Apes, in ours it was mercifully a failure.

As any modern sixth-grade biology student can tell you today, grafting foreign tissue onto the human body does not work, at least not in the context that Voronoff was attempting. The best-case scenario would be for the body to absorb it as scar tissue, which at that time, could have been interpreted as assimilation. The more likely outcome would be outright rejection, which would lead to any number of potential complications, possibly even death. Thus, it was inevitable that these facts would come to light and Voronoff’s bizarre run as a virility vender would come to an end. 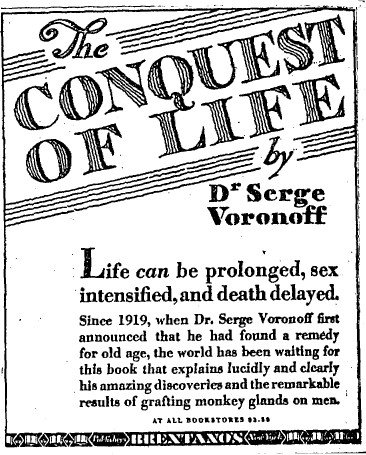 Any positive effects from the monkey gland transplants were no doubt generated either by placebo or marketing sensationalism. Conversely, adverse reactions and failures were shroud in secrecy and or the subject’s own unwillingness to divulge such personal information. Nevertheless, by 1935 the procedure was obsolete with Voronoff and his research being widely discredited by the scientific and medical communities.

Though his research and practice were scientific failures, not to mention dubiously ethical, Voronoff wasn’t far off in his general theory of glands. Clearly, testosterone treatment is a direct descendant of his work, as are drugs like Viagra and Cialis. He died in 1951, his death generating mostly mocking headlines, pronouncing Monkey Gland Man, dead at 85.