Scattered among the human remains, Doc found a fabulous, if not curious, collection of treasure. Gold coins, jewels, and strange artifacts filled the small chambers. The account of the riches is a matter both tantalizing and vexing to historians, hopelessly speculating how they possibly arrived there. Included among the treasure were numerous jeweled swords, a solid gold statue of the Virgin Mary, a crown with 244 gemstones and set with a large pigeon blood ruby, countless gold and silver coins, a jeweled scepter, and chests of letters and documents. Notably, one chest was identified as having belonged to Western Union and contained letters dated up to 1880. Further into the cave system, he discovered an enormous quantity of what he believed, at first, to be iron bars, which, as you may have guessed, were gold ingots. Noss claimed these ingots weighed about forty pounds each and he was barely able to lift them out of the cave. We’ll go into the implications of these artifacts later, as that is another story unto itself. 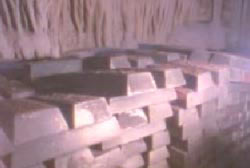 It is important to note that these are the accounts filtered down through surviving members of the Noss family, whose knowledge of the items came from a very paranoid Doc Noss. While some photographic evidence exists, most of what we know comes from the family or a few rare accounts of eyewitnesses to Doc’s strange doings. As it happens, there were very good reasons for Doc’s paranoia and the secrecy in which he operated.

Due to the Gold Reserve Act of 1934, it was illegal for citizens to own gold or gold certificates. This was immensely problematic for Noss. The nation was also mired in the Great Depression, which added a certain amount of risk in staking a claim of that size. Noss believed, and rightly so, that if his fellow man wasn’t trying to rob him, his government most certainly would. Regardless of the risk, they filed for a treasure trove permit and several mining claims on Victorio Peak and the surrounding area. 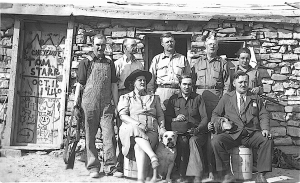 Doc worked the trove as discreetly as he could, keeping the contents of what he removed secret from even his own family. Allegedly, he was able to remove several hundred gold bars between 1937 and 1939, squirreling them away to multiple caches buried across the desert. Because of the Gold Act, Noss was unable to profit much from his find. He sold off small amounts of gold on the black market to finance his efforts, but the bulk of his gold remained buried.

By 1939, his paranoia escalated to mania. Convinced he had been followed to one cache or another, he began digging up his gold and redepositing it in increasingly distant locations. It was this desperation that inspired him to step up his excavation of the peak. Noss hired a mining engineer by the name of S.E. Montgomery to assist him. Montgomery suggested using eight sticks of dynamite to blast open the portal, to which Noss vehemently disagreed, citing the passages were not stable enough. In the end, Montgomery won out and, to Doc’s horror, the entrance to the peak was obliterated.