With a winged body that is half-reptile and half-bird, a metallic beak filled with razor like teeth, a singular cyclops-like eye, and somehow the tentacles of an octopus, the Snallygaster is the stuff of nightmares. First reported in the early 1700s in central Maryland by German immigrants, its name is derived from Shneller Geist, or “quick spirit.” Said to swoop in from dark and silent skies, this beast is reputed snatch up its victims and devour their blood. It was common at the time for locals to paint seven pointed stars on their homes or barns to ward the creature off.

The early twentieth century saw renewed occurrences of Snallygaster sightings, culminating in the accounts published in Middletown Maryland’s Valley Register among other publications, alleging the beast had carried off a local man. These reports were taken seriously enough that Smithsonian offered a reward for the creatures hide, a bounty said to pique the interest of one Theodore Roosevelt. Unfortunately, no such carcass was secured. 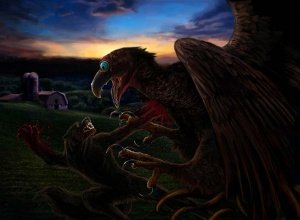 Interestingly, folklore claims that the Snallygaster has a nemesis! Yes, in addition to being averse to septegrams, the Dwayyo, or Maryland Wolf Man, ranks among its mortal enemies. This bipedal human-lupine hybrid also stalks the Middletown Valley and reputedly will not suffer the presence of the Snallygaster. Their battles are the legend of Moonless Maryland nights.