The Lost Dutchman Mine Part One: Jacob Waltz

I’m going to tell you a story. It’s a tale of blood and gold, etched into American arcana, that has inspired treasure hunters for nearly a hundred and thirty years; the Lost Dutchman’s Mine of Jacob Waltz. Hidden amidst the breathtaking but deadly wilderness of the Superstition Mountains, the Dutchman is a siren’s call that has led more than a few to their deaths. It’s a long and twisted tale, built of myth and legend but, if you stick with me, I promise to tell you a secret: the legend is real, and the Dutchman has been found.

Personally, I’ve been fascinated with the legend since I was a kid, seeing it covered on shows like In Search of… and Unsolved Mysteries. Since then, I’ve read fifteen or twenty (out of more than a hundred) books written on the subject and taken every opportunity I could to explore the Superstitions. I even included it as one of the plot lines in my book, The Yellow Painted Man. Now, you could say I’m a bit obsessed, but the truth is that I don’t measure up to the real Dutch Hunters. Compared to the folks who have dedicated their lives to the hunt, I am just a hobbyist. I’ve met a few of the serious hunters along the way, gaining incredible insights and first-hand accounts from them. I will share as much as I can.

When broaching the topic of the Lost Dutchman, one thing needs to be understood from the start, lest we mire ourselves in confusing and contradictory narratives. There are countless variations to this story that branch out in entirely different directions. Even as I try to present the most plausible and central “facts” of the case, there will always be alternative interpretations. I trust that you’ll understand as we proceed. 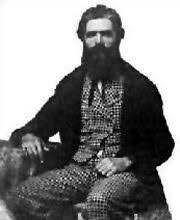 Let’s begin with Jacob Waltz, the Dutchman. Waltz was a German immigrant born around 1810 in the Kingdom of Württemberg, Germany. The term “Dutchman” comes from a misuse of the word Deutsch. He started prospecting in the Arizona Territory in the mid-to-late-1860s and is thought to have worked for several mining companies. Around 1868, he made his way to the Phoenix area and purchased land on the Salt River. It is unknown exactly when Waltz discovered his mine, though by the mid-1870s he began trafficking in rich gold ore.

By all accounts, Waltz was secretive of the source of his ore, taking elaborate steps to disguise his path into the mountains. On several occasions, when he was followed, Waltz would lead his interloper into an ambush and threatened to kill them if they ever attempted to follow him again. On one occasion, it is claimed that he made good on that promise. During the years he actively worked the mine, Waltz sold around $250k worth of gold, at a time when gold averaged $20 an ounce. 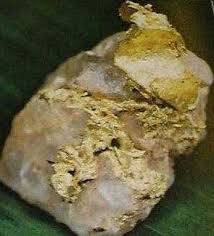 The exact nature of the Dutchman’s gold is a matter of great speculation. One interesting fact is that the geology of the region in which his mine was thought to be not conducive to supporting gold deposits. This opens a rabbit hole of theories as to where it came from, with some making claims that he was “high grading,” stealing his ore from another, known source. The relevance being that, perhaps, his mine didn’t exist where he said it did or that it didn’t exist at all. The gold, however, was real, and there was a lot of it.

The story begins in earnest in the fall of 1891. Devastating floods decimated the Salt River Valley that year, literally washing Waltz’s property away. Old Jake was in his 80s now, but somehow still hearty enough to survive the deluge, riding it out in the branches of a tree. After the waters receded, Waltz developed a terrible case of pneumonia and was unable to care for himself. He was taken in by one of the few people in Phoenix that he considered a friend, a woman named Julia Thomas, who nursed him to the best of her ability.

It is unknown how long the Dutchman lingered, some accounts say days, others, weeks. The only certain fact is that the man was dying. It was during this period that Rhinehart Petrasch, another German immigrant, began visiting the Thomas house. Rhinehart was a comfort to Waltz and a great help in translating, as Waltz preferred speaking German over English.

Then came the night of October 25, the point at which our story takes its first major fork. Waltz’s condition begins to deteriorate rapidly, causing Julia to rush out, desperately seeking a doctor. Instead, she finds two Phoenix locals, Dick Holmes and Gideon Roberts. It is unclear why Julia Thomas leaves the men in her home, presumably it was to watch over Waltz while she continued her search for a doctor.

In any case, Holmes and Roberts sat up with Waltz throughout the night and listen to his deathbed confession. Waltz goes on to give detailed directions to his mine, citing notable landmarks. He then allegedly bequeaths the remainder of his gold, a large candle box of ore that’s stored under his bed, to Dick Holmes. Holmes took the gold and his directions and went home.

Conversely, Thomas claims that, over the time Waltz stayed with her, he gave her and Rhinehart the directions to his mine and even helped her draw a map. Further, the gold under the bed was meant to be hers as a payment for her kindness in caring for him. 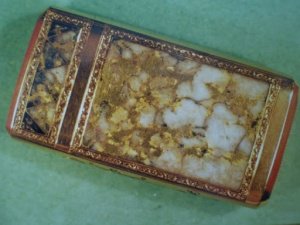 Matchbox made with Dutchman Ore

The rift between these two versions of the events would last a lifetime, with future Dutch Hunters often putting their stock in one camp or the other. There are many things to call in question about both stories, neither form a perfect picture. The Holmes story is generally treated as the more credible version but, in my opinion, it is highly suspect.

Considering that Dick Holmes was one of the individuals that followed Waltz into the mountains, I don’t think he would be inclined to trust him. Further, an 82-year-old man, in the last hours of his life, would be hard pressed to convey so much detailed information while dying of pneumonia. Finally, it makes no sense that he would just give Holmes his whole stash of gold ore for no other reason than he was there at the end.

Before we go too far down that feud’s path, let’s reflect on the facts. On the night of October 25, Jacob Waltz died, leaving behind a sizeable amount of mysterious gold ore and a set of curious clues as to its source. The gold ore has a continuous chain of provenance and samples of it remain to this day. This will prove to be an extremely important detail. More on that later.

Next week, we’ll discuss the first expeditions and making of the legend.

Click here for Part Two of The Lost Dutchman Mine