The Lost Dutchman Mine Part Eight: The Mysterious Death of Adolf Ruth

Click here for Part Seven of The Lost Dutchman Mine

In June of 1931, the hunt for the Lost Dutchman Mine would take one of its most dark and dramatic turns. No single event, before or since, has piqued the public’s imagination, or directed the course of the legend, more than the misadventures of a disabled government worker named Adolf Ruth. 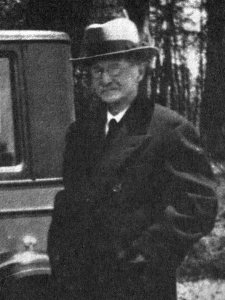 Adolph Ruth came to the Quarter Circle U Ranch seeking to be packed into the Superstitions. This was the same ranch once owned by Jim Bark, where countless expeditions by the Petrasch family, Sims Ely, and other early Dutch Hunters had begun. But Ruth wasn’t after the Dutchman’s gold, per se, but rather a Spanish mine formally owned by the Peralta family. He believed the two to be one and the same, and he had a map to prove it.

The story of his map begins some twenty years earlier with his son, Erwin Ruth, who was working as a veterinarian in Sonora during the Mexican Revolution. Erwin befriended a man by the name of Gonzales and did him a favor by inoculating his cattle against disease. To repay the favor, Gonzales gifted the younger Ruth with a collection of maps handed down from his family and his cousins, the Peraltas. These maps allegedly lead to several mines that the families were forced to abandon when the territory became part of the United States. Erwin passed the maps on to his father, who was known to have a taste for such adventures.

In 1919, the maps proved to have some validity when they led the father and son to some abandoned mines in California. Unfortunately, while exploring the area, the elder Ruth fell into an arroyo and severely broke his leg and hip. He spent two days trapped there and nearly died of exposure but was, luckily, rescued by a search party marshalled by his son. The damage to his leg required a steel plate and he would walk with a pronounced limp for the rest of his life. 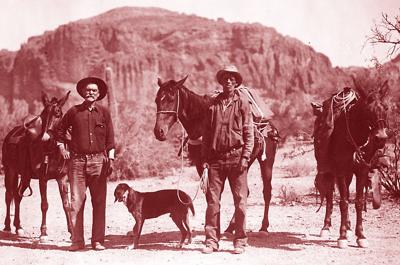 When Ruth arrived in Arizona in June of 1931, he was inspired by his recent research and was convinced that he knew the location of the Peralta/Dutchman mine. Tex Barkley, the owner of the Quarter Circle U at the time, politely listened to Ruth’s story. He was no stranger to Waltz’s legend, no doubt hearing a great deal of it from one of his employees, Brownie Holmes. Barkley did his best to discourage Ruth from entering the mountains at that time of the year, citing that a man with his physical disabilities would be no match for the relentless heat and treacherous terrain. Ruth persisted, refusing to be turned away. Finally, Barkley agreed to pack him in, on the condition that he wait a few days while he attended to some business in Phoenix. 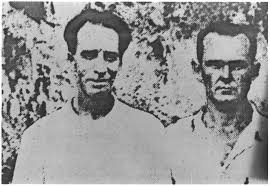 Apparently, Ruth was not satisfied with this bargain and, while waiting for Barkley’s return, convinced two of his ranch hands, Leroy Purnell and Jack Keenan, to pack him in instead. As the story is told, on June 14, 1931, the two cowboys packed Ruth and his gear into West Boulder Canyon, near Willow Springs. He was never seen alive again.

Several days later, Tex Barkley returned from Phoenix to find Ruth gone and immediately rode out to his camp. He found Ruth’s camp to be empty, vacant for at least a day or two. After searching the surrounding area without success, Barkley returned home and notified the Maricopa County Sheriff. The search for Ruth continued for another forty-five days before ultimately being called off, seemingly just another victim of the deadly Superstition mountains. 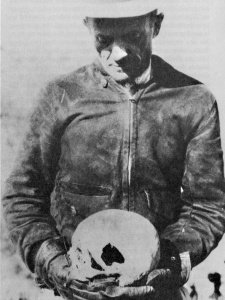 On December 10, while guiding an archaeological expedition, Brownie Holmes discovered the skull of Adolf Ruth, apparently perforated by a high caliber bullet. His skeletal remains would be found several weeks later, and a few miles away, by Tex Barkley and deputy sheriff Jeff Adams near Black Top Mesa. Despite early suspicion of Purnell and Keenan, the medical examiner would rule the death accidental and explain the skull damage as likely being postmortem, caused by predacious animals or scavengers. No murder investigation was performed.

There are others who claim the medical examiner’s first conclusion indicated that the wound was caused by a .45 caliber round, likely at close range. Erwin Ruth believed that his father was murdered but was unable to convince the Sheriff’s Department. The case for murder is debated to this day but, unfortunately, all that remains are photographs, which, while certainly suggestive, are ultimately inconclusive. The medical examiner claims that both wounds on the skull show inward trajectory, hence his exclusion of a bullet passing through one side and out the other. Again, we will never be certain.

Among the items found at Ruth’s camp were a now famous map and a check book inscribed with the words “vini vidi vici,” I came, I saw, I conquered. Erwin Ruth suggests that there may have been more than one map and notes missing from his father’s possessions. The popular belief is that Ruth discovered the mine and was murdered for it.

There are numerous conspiracy theories as to who murdered Adolf Ruth and why his skull was found a mile away from his body. One of the more intriguing among them falls into the theory that the mine was never really lost. Unlike other searchers, Ruth showed up with accurate information that would lead him to the mine. If we subscribe to this theory, the mine was already being worked by someone close to Tex Barkley, if not Barkley himself. Considering the legends associated with the mine’s wealth, keeping it secret would be more prudent than making a formal claim and drawing a swarm of would-be treasure seekers. Thus, Ruth had to die.

Knowing what we do today about the Lost Dutchman’s location, it seems that this idea is very likely. This also accounts for an enormous amount of misdirection and inconsistency in the clues, the greatest subterfuge of all being that the mine was somewhere in the western Superstitions, near Weaver’s Needle. Some authors claim that Ruth’s body was moved from where he was killed to reinforce this theory, thus his head becoming so far separated. 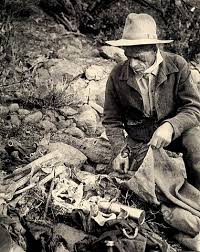 I have a theory that I’m working on concerning Adolf Ruth. If I’m wrong, feel free to correct me. I’ve done my best to trace the origins of the Dutchman’s clues which, up until now, have either come from the Holmes camp or the Thomas/Petrasch camp. Neither Dick Holmes nor the Petrasch family left us with a written record. The closest we have is the Holmes Manuscript, Sims Ely’s book, and Jim Bark’s notes, all of which were never seen in print until well after Adolf Ruth’s death. However, all these sources cite some version of the Peralta story, with wildly varying accounts. My theory is that Adolf Ruth introduced the Peralta story and it was then retrofitted by various authors to fit their narratives. If Ruth was killed because he knew where the mine was, having arrived there by completely independent sources than Jacob Waltz, it would stand to reason that information would be folded into the legend by anyone trying to sound credible on the subject.

*After further research, several versions of the Peralta legend did exist at or before the time of Waltz. Ruth, however, appears to have learned the Peralta story while in Mexico.

But just who were the Peraltas? We’ll dive into that story next week.

Click here for Part Nine of The Lost Dutchman Mine