The Grave of the Female Stranger

In the cemetery of St. Paul’s Episcopal Church, in Alexandria, Virginia, lies a curious grave, its occupant identified only as the Female Stranger. The plot is marked by a unique granite monument in the form of a dining room table, which bears an equally strange inscription:

This stone is placed here by her disconsolate
Husband in whose arms she sighed out her
latest breath, and who under God
did his utmost even to soothe the cold
dead ear of death

To him gave all the Prophets witness that
through his name whosoever believeth in
him shall receive remission of sins
Acts. 10th Chap. 43rd verse. 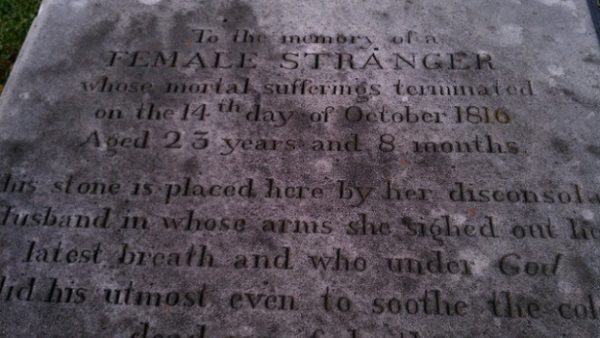 The facts surrounding the mystery are scant. Sometime before October 14, 1816, a man and woman (possibly English) checked into Room 8 of the Gadsby Tavern. They kept to themselves, though the man was seen about town. On October 14, the woman succumbed to an unknown ailment. Her “husband” prepared her body, sealed her in her coffin, and attended her funeral, all privately and alone. Once the monument was placed, the man left town and was never heard from again.

The mystery of the Stranger has persisted for more than two hundred years, spawning endless theories but no real answers. Further obscuring the truth are the works of early writers and historians, who opined on the subject with their own embellishments. In 1833, an anonymous poem was published in the Alexandria Gazette, later attributed to Susan Rigby Dallam-Morgan. Then, in 1836, Lucy Seymore (pen name of Dallam-Morgan) wrote a column in the Philadelphia Saturday Courier, in which she adds significant details to the story, though her sources are murky at best. It is from her that we get the image of the Stranger as a fragile, pale, and beautiful woman, hiding behind a long black veil. Numerous other accounts would emerge over the 19th century, published in newspapers, journals, and even novels, each adding their own twist to the tale. 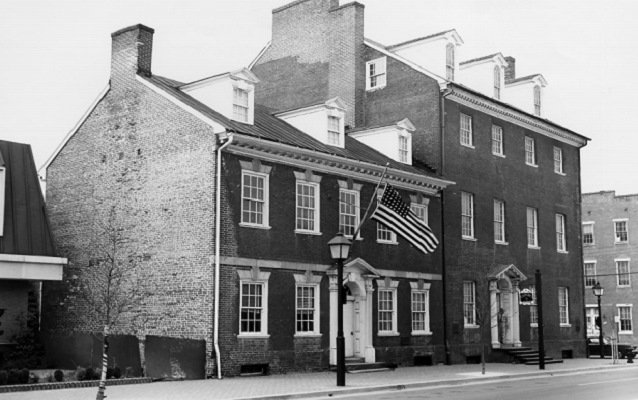 One of the more romanticized theories involves Theodosia Burr Alston, daughter of Aaron Burr, who disappeared mysteriously at sea in 1813. In this version, the ship she is on, the schooner Patriot, is attacked by pirates off Cape Hatteras and she is taken prisoner. Depending on the version, she either falls in love with one of the pirates or becomes ill. Either way, she is taken in secrecy to the Gadsby Tavern to convalesce, where she later dies. In this version, as in many others, the bereft husband sends money for the grave upkeep, and or returns in secret every year to put flowers on her grave. Interestingly, in most of these scenarios, the visits or grave upkeep ceases in the early 1830s when, it is assumed, the husband met his own fate.

A popular version, largely evolving from early press accounts, paints the husband as a scoundrel who, again, depending on the version, spends counterfeit money, swindles townsfolk, and borrows money for the monument which he never repays. This is backed up by the supposed testimony of a former Alexandria merchant who leant him the $1500 for the monument, plot, and funeral arrangements, who later encountered the man while they were both incarcerated in New York’s Sing Sing Prison. This telling is a fitting example of the type of composite stories, spun from early writings, taken as fact. 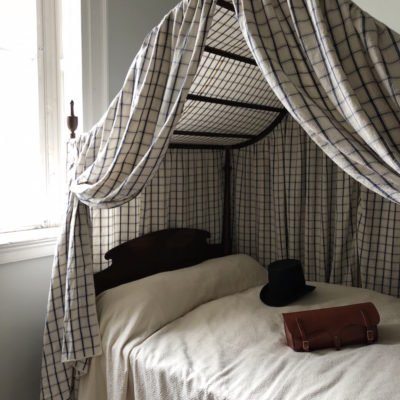 My favorite theory is that the Female Stranger never died at all! Working with the accepted facts, the woman’s death was witnessed only by her husband and he attended to all of her funeral arrangements privately, including the sealing of her body in the coffin. The only thing we know for certain, is that a grave was made and elaborately marked. In several versions of the story, the man returned to the grave secretly sometime in the early 1830’s, exhumed the body and took it away with him. Now, assuming there was no body, what did he take from the grave?

If you visit Alexandria today, Room 8 of the Gadsby Tavern is still there and, according to some, still occupied by the ghost of the Female Stranger. Reportedly, she has been seen lurking about the restaurant and museum. If you’re a beer lover, try a Long Black Veil IPA, named in her honor. Of course, the grave still remains, though the inscription is weathered and difficult to read. Be sure to bring some flowers and your appetite for ghost stories.