The Bloody Revenge of Saint Olga

Confucius said, “Before you embark on a journey of revenge, dig two graves.” Saint Olga must not have heard this advice, as she dug thousands.

Little is known of Olga’s early life, not even her exact year of birth, though it is said she is from Pskov and of Viking heritage. She enters history as the wife of Igor I of Kiev, ruler of Kieven Rus’, a territory that occupied parts of Russia, Ukraine, and Belarus.

In 945 AD, Igor rode out with his army to Iskoresten (now Koresten) in the northern Ukraine. The city was the capital of the Drevillians, a quasi-ally that had recently stopped paying tribute to Igor. Seeing Igor’s far superior army, the Drevillians had no choice but to capitulate. Oddly, perhaps out of arrogance or stupidity, Igor returned to Ikoresten with a smaller compliment of soldiers. This time the Drevillians would have none of it and they tied Igor to a tree and tortured him to death, allegedly by tearing him in two.

Prince Mal, the leader of the Drevillians and the murderer of Igor, took the occasion as an opportunity to visit Olga in Kiev, demanding her hand in marriage. Olga’s response was one for the ages. She informed Prince Mal that his offer was kind and reasonable and that he and his entourage should return to their boat until the following day when a proper welcome could be prepared for them. The following day, Olga ordered the people of Kiev to lift Prince Mal and his emissaries, boat and all, and carry them to the courtyard. Here she’d had a pit dug the previous day, deep enough to consume the boat and crew. She then looked on as Prince Mal and company were buried alive.

Olga did not stop there. She immediately sent word to Ikoresten that they should send their distinguished men to Kiev to join Prince Mal, so that their union could be sufficiently be honored. Oblivious to the fate of Mal, the Drevillians obliged. Upon arrival, Olga directed them to the bathhouse so they could bathe before being reunited with their leader. She promptly ordered the doors locked and the bathhouse was burned to the ground. 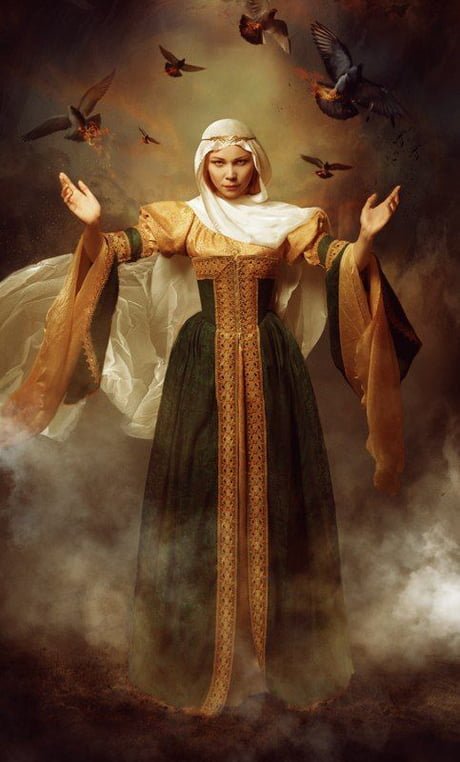 Of course, Olga was not finished with her revenge. She sent word again to Ikoresten, this time to instruct them to prepare a great feast with copious amounts of mead at the site of her husband’s murder, so that she may grieve properly before betrothing herself to their Prince. Olga did indeed grieve, then ordered her army to slaughter the drunken Drevillians. Hundreds were slain.

Now aware of Olga’s less than friendly intentions, the people of Ikoresten fortified themselves for siege. The siege lasted for over a year until Olga sent one final message. She demanded that the Drevillians lay down their arms and pay tribute to Kieve Rus’. As a token of their compliance, each household was required to give a pigeon or a dove to Olga in good faith. The Drevillians readily agreed and produced the requisite birds. Olga ordered her soldiers to tie burning embers to the bird’s feet and release them outside the city. When the birds returned to their homes, the resulting fires were devastating, effectively obliterating the city. Those who survived never questioned her regency.