Murder is a morbid enough subject in its plainest forms, with simple and tangible motives like rage, greed, and jealousy. However, when the act is inspired by darker and more esoteric causes, it can become unfathomably terrifying. Here are three cases of ritual murder that rank among the strangest and most disturbing ever documented.

On February 8, 1981, the headless body of a homeless man, Leroy Carter Jr., was found in a sleeping bag in Golden Gate Park. Also located at the scene was a small box containing the remains of a slaughtered chicken. Closer investigation revealed the man’s head was removed cleanly, as if with a very sharp axe or machete. Two kernels of corn and one of the chicken’s wings had been inserted into the victim’s neck. 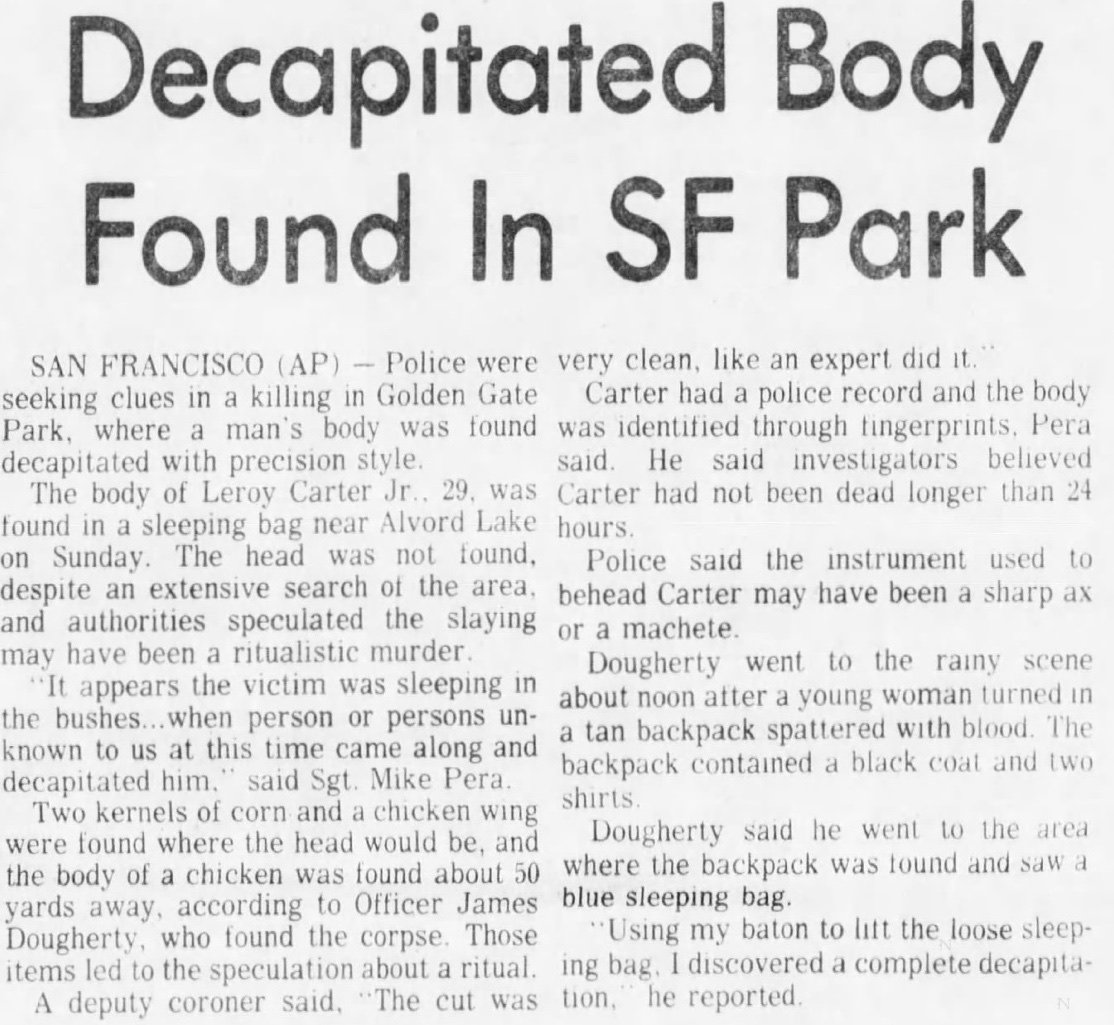 Because of the ritualistic elements involved in the murder, local police reached out to Detective Sandi Gallant, a specialist in occult crime. It was Gallant’s assessment that the killer was a practitioner of Palo Moyombe, a religion similar to Santeria, originating in the Congo Basin around the beginning of the sixteenth century. She was further able to identify the ritual as being specific to the god Ellegua, ruler of gates and crossroads. This conclusion was reached because of the presence of corn, particularly sacred to Ellegua.

In her report to the police, Gallant predicted that the practitioner would place the head in a Nggana, a type of ritual cauldron, to be used in ceremonies for a period of twenty-one days. At the end of the three-week period, if successful, the sorcerer would then sleep next to the head for another three weeks. Afterwards, the head would be returned to the site of the murder, a total of forty-two days later.

After presenting her evidence and stating her theory, her colleagues in the police force did not take her investigation seriously and scoffed at her presentation. Thus, the murder site was not put under surveillance. Exactly forty-two days after the murder, the head was returned to the site. There were no witnesses and to this day the crime remains unsolved.

In 1991, William Ault was working as a carny in a traveling carnival in Indiana when he discovered a shocking secret, his coworkers Jimmie Penick, Mark Goodwin, and brothers Keith and David Lawrence were members of a murderous Satanic cult. Rather than reporting their crimes to the authorities, Ault was intrigued and asked to join the cult. To Ault’s frustration, his petition was denied. Unsatisfied with the rejection, Ault threatened to go to the police.

Penick and his cult agreed to indulge Ault. They took him to a secluded location where they had constructed an altar. After praying to Satan, they tied the young man to the altar, at which point Penick produced a knife and cut Ault from throat to stomach. He passed the knife to the other cult members, who carved ritual symbols into his flesh, including inverted crosses. Penick then asked Ault if he was ready to die, cutting his throat after receiving the answer.

The crew removed his head, hands, and feet and burned them, discarding the rest of the body. Afterwards, they treated themselves to Arby’s with the money they had taken from Ault’s wallet. 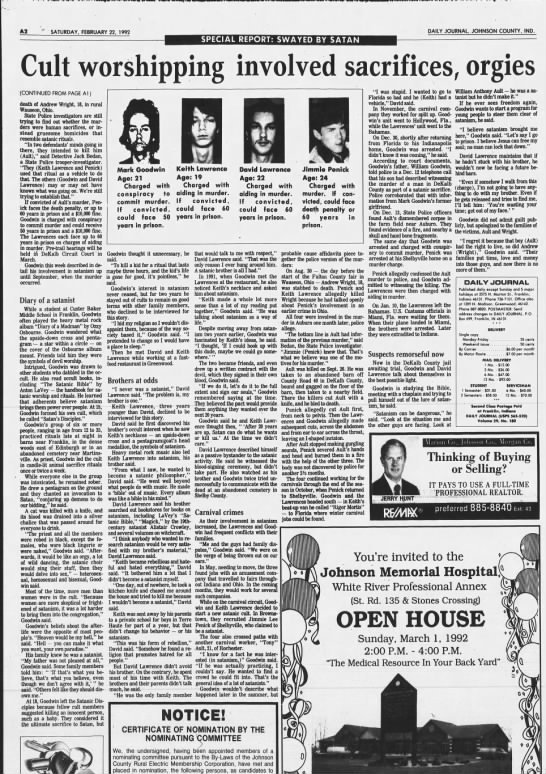 The Order of the Solar Temple

The OTS was a religious sect founded by Luc Jouret and Joseph Di Mambro that borrowed its beliefs from a broad spectrum of religious and occult philosophies. Drawing heavily from the Rosicrucians and Knights Templar, one of their principal claims was that the second coming of Christ was imminent, only he would be returning as a solar god-king. In practice, their faith blended Christianity and Islam, toward the end of uniting the two faiths. Structurally, the OTS resembled a masonic style of hierarchy, with various levels and grades obtained through study and ritual.

In late October of 1994, Quebec-based cofounder Di Mambro received an ill omen when it was determined that the child of two of his followers was the Antichrist. Di Mambro ordered the boy to be stabbed to death with a wooden stake, then he killed his parents. The event would serve as a tragic catalyst that would send shockwaves around the world and claim the lives of over seventy members of the OTS. 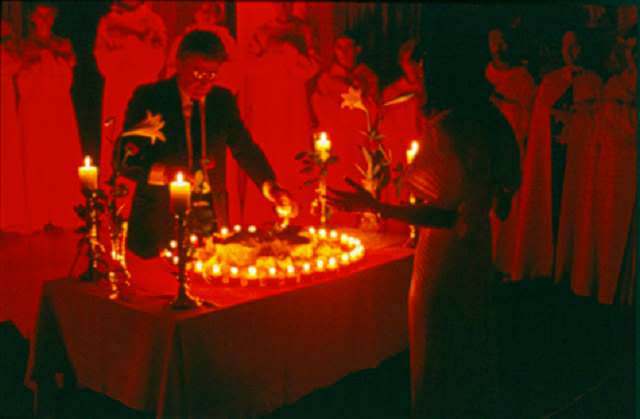 The following day, Di Mambro and his remaining followers held a “last supper” before ending their lives in a ritualistic murder-suicide the next day. Thirteen bodies were found, dressed in ceremonial robes and arranged with their feet outwards in a starburst pattern. Most of them had been drugged before being shot in the head, plastic bags covering their faces. Di Mambro was among the dead.

A few days later, in the towns of Cheiry and Salvan, Switzerland, a total of thirty-eight more members of the OTS were found, victims of murder or suicide. Causes of death ranged from poison, firearm, smothering, and bludgeoning. Most of the victims were found in a secret underground chapel, dressed in their Templar-style robes and arranged in the same circular style as found in Quebec. A number of other bodies, including children of the cult members, were found in three different ski chalets that had been set alight by remotely triggered incendiary devices.

In December of 1995, sixteen more bodies were discovered in the Vercors Mountains of France. They were also arranged in star formation, similar to the previous deaths. It was discovered that fourteen of these members were shot by two others who then took their life via immolation. In March of 1997, five more cultists took their lives in a house fire in Quebec. The fire was survived by three children, who were heavily drugged and locked in a shed behind the house. Several other mass suicide events were thwarted in the late 1990s, thanks to tips and information from other members.

It has been claimed by many former members of the OTS that the cult was just a vehicle to bilk money from its followers. There is certainly evidence to support this, as many of the victims gave their entire fortunes to the OTS, totaling in the millions. Most of the victims were prominent members of society, including a mayor, journalists, writers, wealthy entrepreneurs, and even an Olympic athlete. It certainly begs the question, what profound and transcendental secrets were the OTS offering that could brainwash such educated and successful people?