Undoubtedly, you’ve heard of the Bermuda Triangle or, perhaps, its Pacific cousin, the Devil’s Sea, but have you heard of Poyang Lake? Known as China’s Bermuda Triangle, Poyang Lake is the largest freshwater body of water in China, located in Jiangxi Province. It was formed around 400 AD when the Yangtze River changed course, causing the Gan River to flood the plain along its shores, and the lake averages about 1400 square miles in size. I say averages as its size fluctuates massively with drought conditions and the operations of the Three Gorges Dam, but more on that later.

In 1363, the Battle of Lake Poyang was fought here which, to this date, is the largest naval battle in world history. The massive loss of life during the fierce conflict is often credited as a source for the paranormal activity that plagues the lake. Hundreds of ships and thousands of lives have been lost in the centuries since, vanishing without a trace. 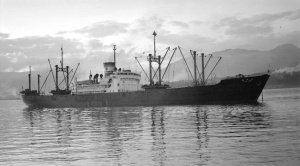 Notable disappearances include the April 1945 vanishing of a 2000-ton Japanese cargo vessel called the Kobe Maru in calm and clear weather. The freighter was laden with plundered artifacts and valuables and went down with two-hundred soldiers and crew. As it went down in less than twenty-five feet of water, the Japanese immediately mounted a recovery effort. The entire dive team was lost to the effort, save one survivor, driven mad by the experience. On August 3, 1985, thirteen ships went down on the lake in a single day, vanishing without a trace, unusual by any maritime standards.

As you might imagine, explanations range anywhere from ghosts to aliens and there is no shortage of theories. One plausible cause could be the abnormally strong winds that sweep across the water with sudden ferocity. In fact, there are windfarms located across the area for that very reason.

The most troubling aspect of these disappearances, however, is the lack of surviving evidence. As I mentioned earlier, the lake fluctuates radically in size and is relatively shallow. In some years, notably in 2016, the lake dries up almost completely. Now, I’m not claiming that wreckage is never found, however a surprisingly small amount of it is turns up considering the volume of ships gone missing over the years. Regular searches with GPS and metal detectors during these dry periods produce a shockingly small number of wrecks.