Charles Dellchau was an artist and flight enthusiast. Beyond that, his life is as mysterious as the 13 leather bound notebooks that comprise his known works. Was he a member of a secret society dedicated to advanced aeronautical technology? Perhaps an early UFO contactee? Or was he just an extremely imaginative retired butcher, occupying his golden years with artistic hobbies? 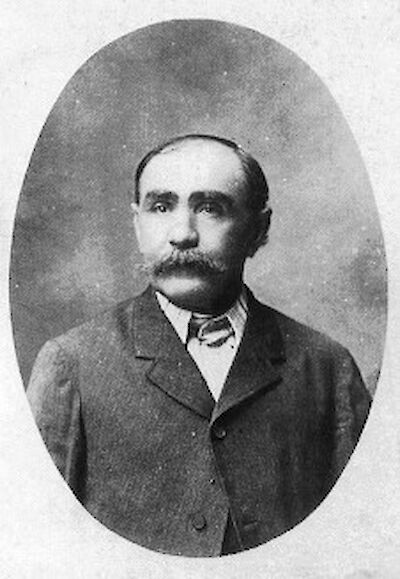 Dellchau was born in Prussia in 1830 and emigrated to Texas in 1850 where he found work as a butcher. He achieved citizenship in 1860 in Fort Bend County. In 1861, he married a widow, Antonia Hilt, with whom he had three children in addition to the daughter from her previous marriage. In 1865, he signed the Civil War Amnesty Oath, which described him as 5’3 with fair hair and hazel eyes. In 1877, both his wife and his six-year-old son, Edward died. In 1899, he retired and began creating art and documenting his life story. He died on April 20, 1923, in Houston, Texas. 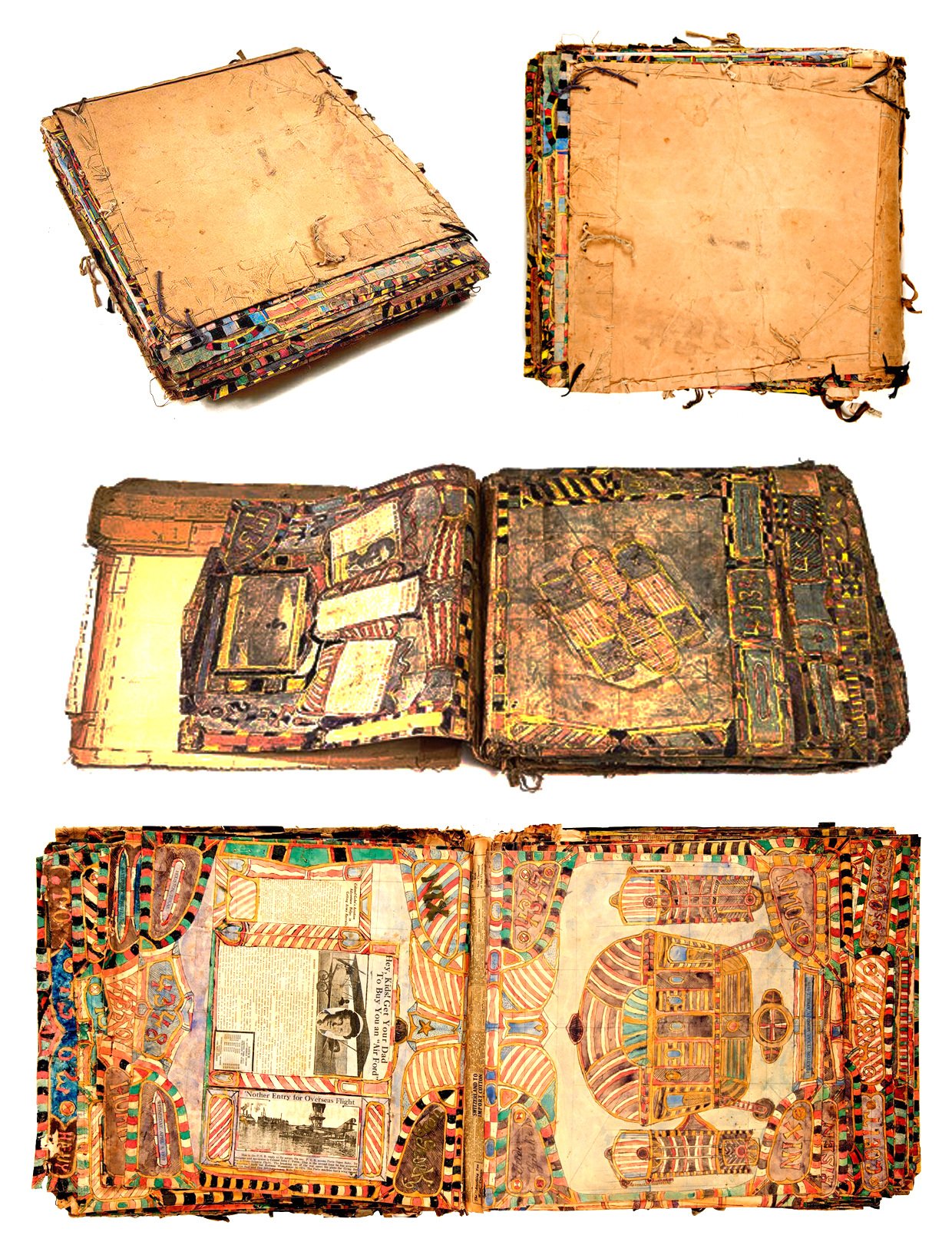 These slim dates and facts comprise much of what the world believes to be true of Charles Dellchau. While there is little detail or substance, there is a consistent record of him existing in Texas from his emigration in 1850 all the way to his death in 1923. That is, with the notable exception of a few missing years between about 1856 and 1860, when he allegedly lived in Sonora, California. It is these missing years that are the sole subject of Dellchau’s art and writing in his voluminous collection of notebooks, documenting the fantastic tale of the Sonora Aero Club. 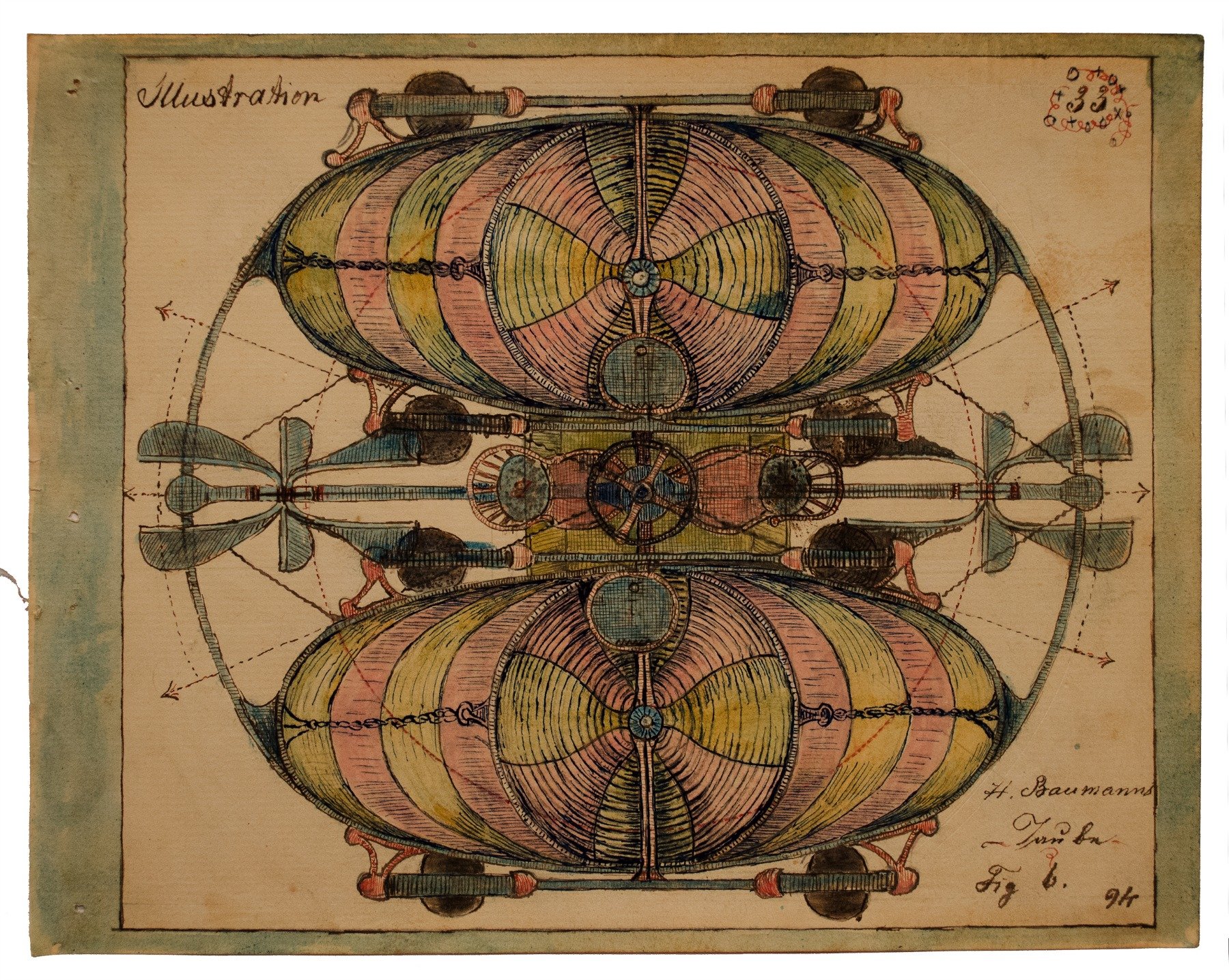 Dellchau delivers an incredibly intricate narrative, complete with detailed illustrations of aircraft, called “Aeros,” said to be designed and operated by the club half a century before the Wright Brothers. At the core of the story is a special anti-gravity gas, discovered by one of the principal members called “NB Gas.” This gas is used to both lift the crafts and as fuel to propel them. The club is successful in developing several working aircrafts using the NB Gas, though, accidents, rivalries, and sabotage eventually cause the group to disband, with the final stroke being the untimely and accidental death of Peter Menace, the co-founder of the club and the inventor of the NB Gas. 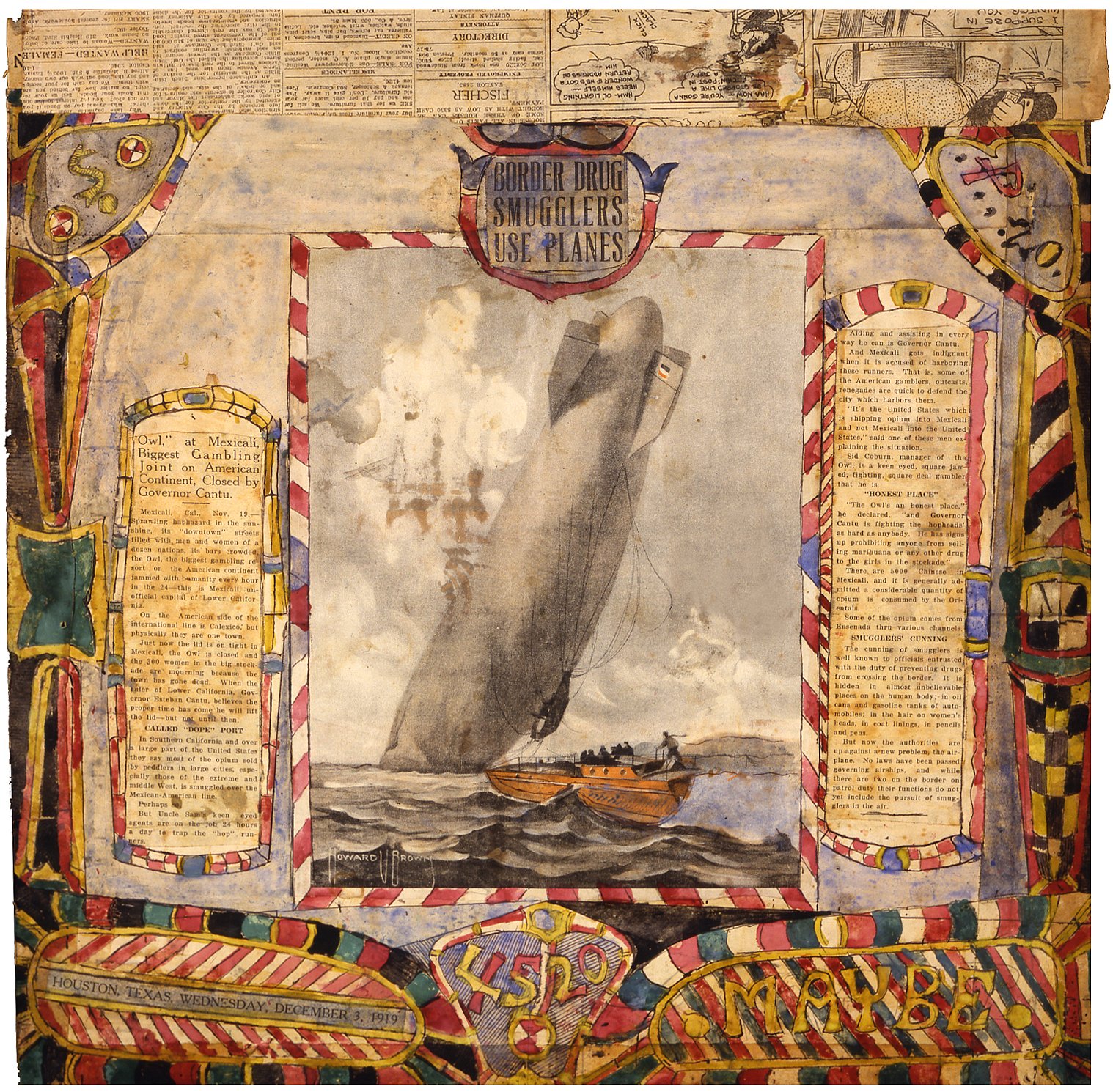 Fueling the intrigue, Dellchau imbeds coded messages and imagery throughout his 5000 or so works, concealing the more secret aspects of the club. In some cases, he incorporates contemporary news articles supposedly concerning past members, their activities or inventions. These tantalizing clues frequently point toward other, known, historical sightings of unidentified flying crafts. An example of this would be a series of strange sightings in the late 1890s, such as the Aurora, Texas, UFO incident of 1897. 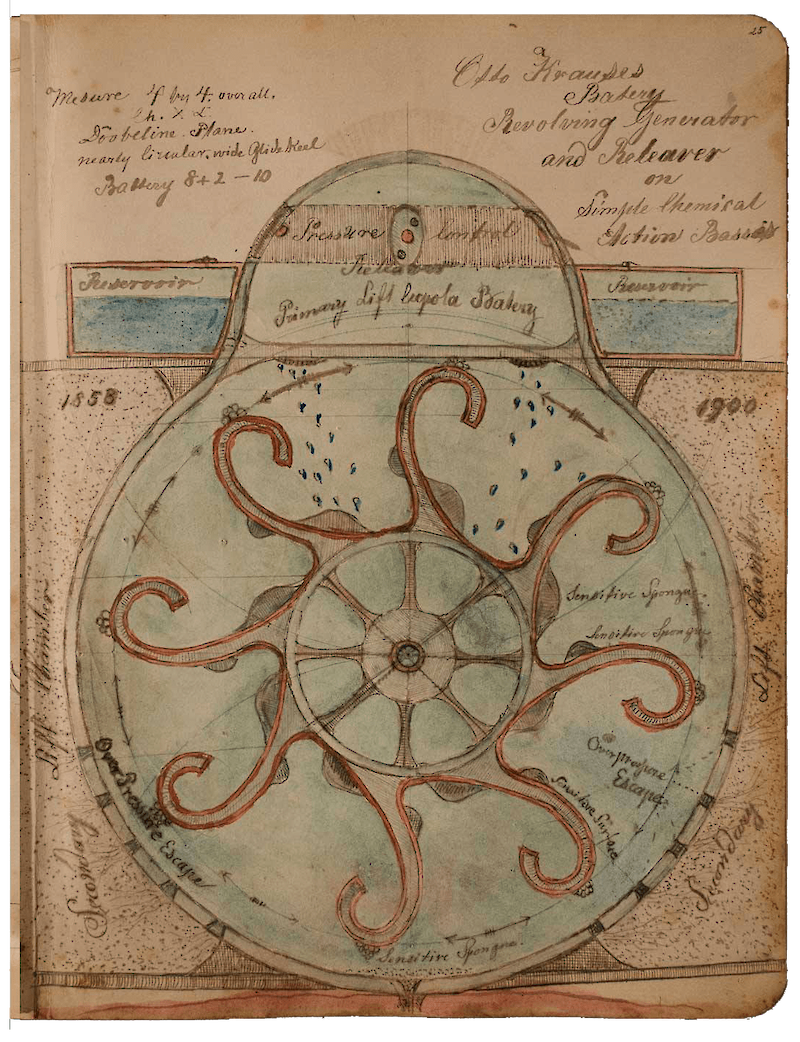 While it reads like something from Jules Verne, it is unlikely that Dellchau ever intended to publish his work. In fact, it is unlikely that he ever shared it with anyone, even his own family. This is evidenced in the strange manner in which his collection was discovered. When he died in 1923, his notebooks were left gathering dust in the attic of the family home and there they stayed for almost fifty years. It wasn’t until a fire struck the house in 1967 that his work saw the light of day, and only then to be set on the curb for trash collection. A local antique dealer named Fred Washington saw the collection and paid the trash collector $100 for the items. The notebooks sat around Washington’s store for another year until a local college student borrowed them to use in a project concerning the history of flight. Slowly, the work began to draw attention, and the deeper mysteries began to reveal themselves. Objectively, his work is inspiring. The awe and wonder of the discovery of flight is impossible to understate. Not until the moon landing would humanity’s collective imagination be so completely enthralled. His love for the subject is so pure, and shines so clear, that the bizarre nature of his illustrations is often overlooked in the grander vision of mankind achieving what the gods have denied them.

Charles Dellchau remains an enigma in the art world. Outsider artist or witness to a miraculous secret history? No concrete proof has been discovered proving the existence of the Sonora Aero Club. Research into the names found in the notebooks have likewise proved challenging. This, of course, doesn’t disprove it either, after all, they were a secret society. Regardless of its status in reality, his work stands as a monument to imagination and will continue to inspire for generations to come.