There is something deeply unsettling in the number of unexplained disappearances occurring in our National Parks. That’s not to say that it is in any way unusual for visitors to go missing, people get lost all the time and it’s hardly a mystery. Considering there are 423 areas covering more than 85 million acres managed by the National Park Service (NPS) and a whopping 500,000 square miles of protected land dispersed over fifty states, it’s to be expected. No, what I’m referencing is something much more nefarious.

A pattern of curious disappearances has manifested over the last hundred years in our National Parks. Often the incidents have been highly publicized, though their peculiar nature is generally, and rightfully, overshadowed by the human tragedy. Understandably, no one wants to hear about aliens, Skinwalkers, or Bigfoot when their child is missing in the wilderness. Still, the pattern exists. Credit to the research of former detective David Paulides and his Missing 411 book series for revealing the commonality of peculiar evidence and providing a broader context. It is his work that has brought much of this into the light.

Admittedly, these claims read like X-Files fan fiction, however, if you research the cases, you will find them factually credible, regardless of whether you agree with Paulides’ conclusions. To that end, I invite you to develop your own theories, as these disappearances defy a single explanation. In fact, the characteristics of them trend toward categorical events with different, yet no less unnerving, circumstances. 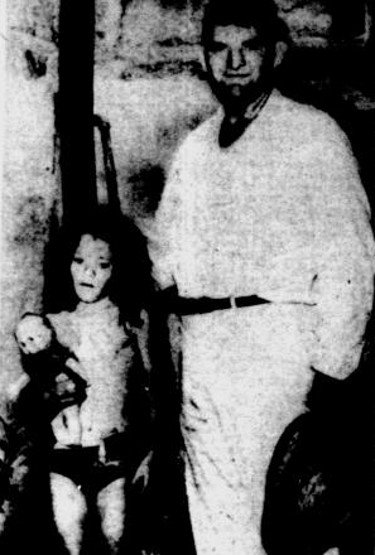 One of the most common reports is the abrupt vanishing of a child. Typically occurring in fair weather and in familiar areas, their friends or family only steps away. They turn a bend, stoop to pick a berry, divert their attention for a few seconds, and the child is gone. Of itself, it’s not too mysterious from an objective viewpoint, however, it is in the return of the victim that the story takes a more ominous tone.

Many of the victims are found alive, sometimes days later, and often perplexing distances away. Most claim they stepped off the trail only a few steps and became lost as if the trail had just vanished behind them. Many experience missing time, perceiving only a few hours or a day as having passed, often a mere fraction of the duration of their actual disappearance. Caves figure prominently in these reports, with several descriptions mentioning entering a cave at night yet looking back through the mouth to see that it is day outside.

What’s even more frightening is that, in many of these accounts, the child is not alone. Several have claimed “bears” or other animals have looked after them, feeding them berries and other foraged foods. Others have reported “human” captors appearing as family members and behaving strangely. Tragically, many are never seen alive again. In such cases, bodies are often discovered miles from where they disappeared and in terrain that would be near impossible for the victim to reach. Commonly, shoes or clothing is missing, or, in some cases, put on backwards or inside out, as if dressed by someone unfamiliar with how clothing functions.

Take the case of six-year-old Lillian Carney who went missing in August of 1897, near Massardis, Maine. She disappeared around noon while picking blueberries with her parents. 200 people came out to help search, finding her alive three days later, not far from where she vanished. Curiously, she had little to say about her absence. Only that, “The sun was always shining in the woods.”  In 1946, eight-year-old Katherine Van Alst disappeared from her family’s camp site at Devil’s Den State Park in Arkansas wearing nothing but a bathing suit. Six days later she walked out of a cave, calmly greeting searchers, saying, “Here I am.” She was over thirty miles away over mountainous terrain and six hundred feet higher in elevation.

In 1957, in Yosemite, a two-year-old boy wandered past the perimeter of his campsite and vanished. After bloodhounds and hundreds of searchers were deployed, they found the boy 3000 feet up the mountainside wearing only his T-shirt and one sock. 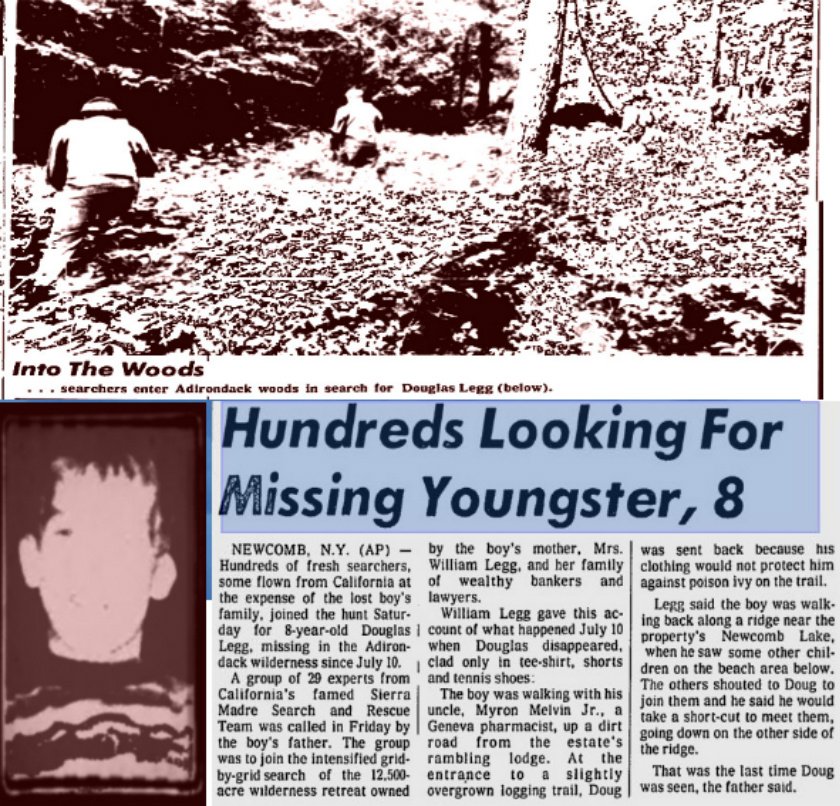 In 1971, Douglas Legg was hiking with his parents near their cabin at the Santanoni Estate near Newcomb in the Adirondack Mountains and was never seen again. Doug’s family described him as a mini-woodsman and well familiar with the land around their property. When his uncle sighted poison ivy on the trail, he instructed Doug to go back to the cabin and put on pants, a distance of less than a half mile. He passed his cousins on the trail, who last saw him within sight of the cabin, a short fifty yards away. Bloodhounds were brought in, though confounded by the odd dead-end scent trails. No trace of him was ever found.

Then there is the case of six-year-old Dennis Martin occurring in the Great Smoky Mountains National Park in Tennessee in 1969. Martin was playing hide and go seek with family and friends when he stepped behind a shrub to hide. After five minutes, when he didn’t emerge, his father went looking for him. To this day, the manhunt for Dennis Martin is the largest in park history, though all they turned up was a few footprints; one foot bare, the other in an Oxford, matching the shoes he was wearing at the time. Martin’s father later accused the FBI and the NPS of discounting eye-witness reports and even suppressing them. A man named Harold Key and his family heard a horrible shriek and witnessed a large, hairy man, possibly covered with animal pelts, carrying what looked like a boy wearing a red shirt and running into the forest. There is a pattern of obstruction among the NPS as well, but we’ll get to that later. 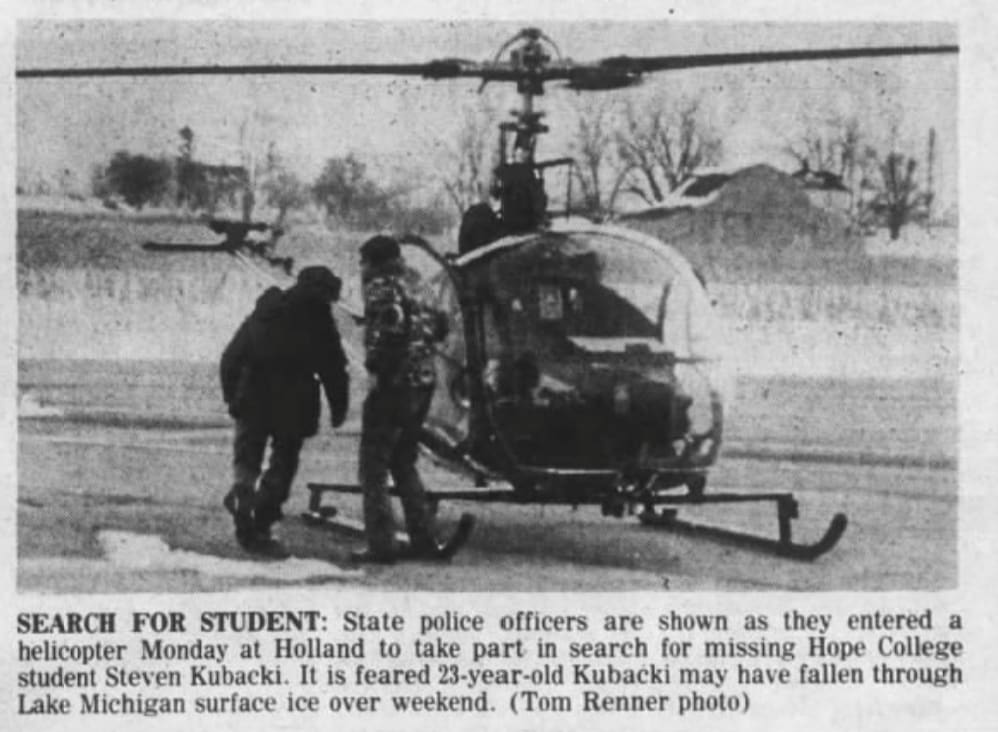 It is not always children that go missing, either. There are many instances of extremely capable and experienced adults that meet with mysterious fates.

Steven Kubacki was a twenty-three-year-old college student in 1978 when he went cross country skiing in Indiana Dunes State Park along Lake Michigan’s southern shore, surrounded by, at the time, the NPS’ Indiana Dunes National Lakeshore. When Steven failed to return home, he was reported missing and search and rescue teams were dispatched. Known for being an experienced outdoorsman, mountain climber and skier, it was thought to be unlikely that he became lost. When his skis, pack, and personal items were found at the end of a two-hundred-yard trail of his tracks leading toward the lake, it was believed that he fell through some ice and drowned. However, that is not where Steven’s story ends.

Fifteen months later, Kubacki woke up in a field in Pittsfield, Massachusetts, seven hundred miles from where he disappeared. He was wearing clothes that did not belong to him and had no idea how he got there or how long he had been missing. Laying nearby was a backpack with maps, new shoes, $40 in cash, and a commemorative T-Shirt from a marathon in Wisconsin. None of these items were familiar to him. Kubacki has since put the events behind him and refuses to discuss them.

A similar occurrence took place in 2018, when a Canadian fireman, Danny Fillippidis, was on vacation in Lake Placid, New York. While skiing on Whiteface Mountain, Fillippidis vanished without a trace. A massive search and rescue operation was launched. Six days later he was found in Sacramento, California. He was wearing clothes that were not his own and possessed a new iPhone.  It’s suspected that he encountered some unknown trauma on the slopes, likely injuring his head in the process. He has no memory of the missing six days or how he came to be on the complete opposite coast.

There are countless other tales of the missing, from all parts of the country. It’s an impossible leap in logic to say that these cases are all connected by some grand conspiracy and not even Paulides is claiming that. However, he does claim that law enforcement, park officials, and Search and Rescue (SAR) know more than they’re telling. For example, while investigating the Denis Martin case he was told of a similar disappearance where a “humanoid” was suspected to be involved. Not only was the information concealed from the press, but the FBI operated independently of SAR, heavily armed as if on a military operation or hunting something. According to Paulides, there is alarming trend of details being omitted in these kinds of cases if they seem odd or beyond the pale.

Of these lesser reported, but commonly observed phenomenon, is the remains of clothing. Specifically, neatly piled clothing, laying on or around the trail. One SAR team member described it as being what you would expect to see if someone melted out of their clothes and they just fell there. Another experience that is common among both those who have returned from being missing and those searching for them are strange voices. Sometimes the voices are distant, calling for help, but in strange monotonous repetitions. Those who hear it liken it to something mimicking a human voice. Others claim to hear someone calling their name, just out of sight, or off the trail. 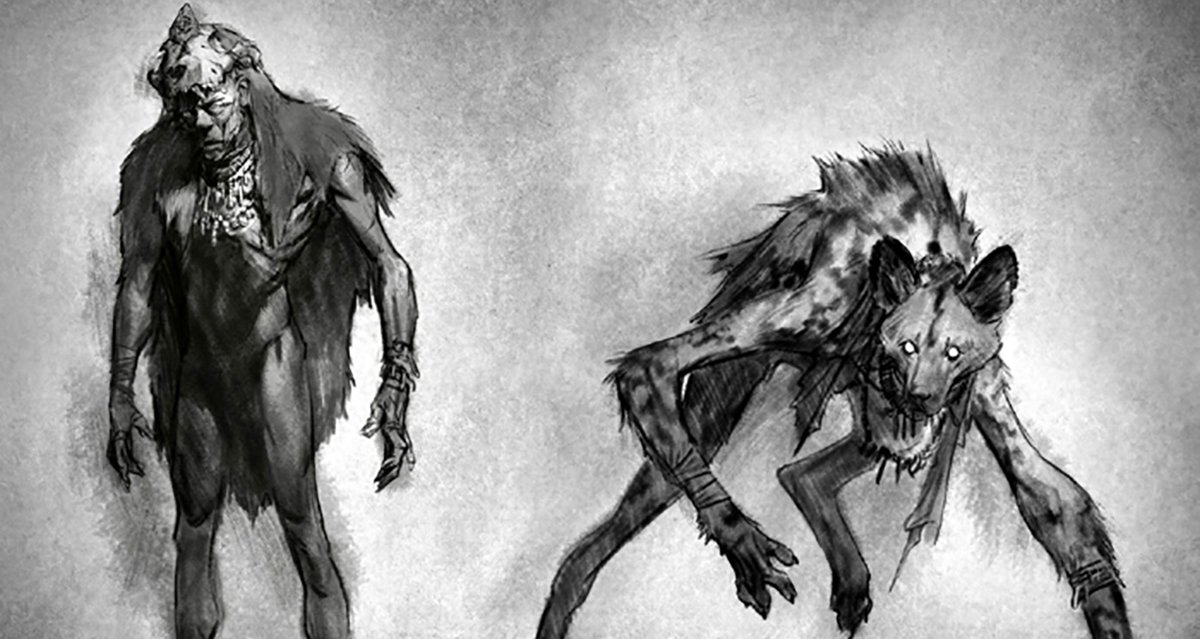 Theories abound as to what may be causing these disappearances. Wild animals are frequently suggested, providing a natural and reasonable explanation to some stories. Stranger, but still within the natural realm, are transients or even feral humans. In some cases, notably Denis Martin’s, there could be something to that theory. The paranormal often fills the void where facts and evidence leave us wanting, inspiring the darker places of our imagination. Aliens clearly take a lot of the blame, while Wendigo and Skinwalkers rank high on the list, along with Bigfoot in all his regional personas.

Millions of people visit our National Parks every year and few of them disappear, statistically, not even a drop in the bucket. This is no solace to those who lose their loved ones, whose tragedy runs deeper than loss. For them, the pain of not knowing keeps them hanging on, denying them the closure they deserve. So, even if you scoff at the idea of unconventional or paranormal explanations, just remember that there are real victims here and their mysteries remain unresolved.