On the lonely summit of Ben Macdui in Scotland’s Cairngorm mountains, something lurks in the mist and fog, stalking those who dare trespass. 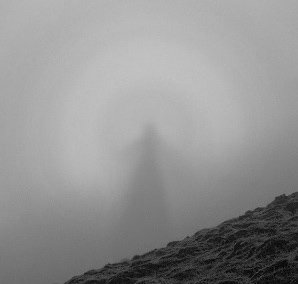 Documented reports of the Greyman of Ben Macdui reach back as far as 1791 and are consistent in their description. In appearance, the creature is said to be humanoid, covered in short grey hair, and standing over ten-feet-tall. However, some accounts claim it to be upwards of twenty or even thirty feet in height. While similar to the Yeti or Bigfoot, the Greyman is not thought to be entirely corporal, often referred to as a spirit or devil.

Typical encounters occur when visibility is obscured by mist, with the preliminary manifestation being described as an oppressive or anxious feeling, followed by slow, heavy footsteps crunching in the rocks just out of view. The steps are methodical, stalking the hapless hikers as they make their way across the summit. When it chooses to reveal itself, it does so menacingly, materializing from the fog or mist.

Consider the 1943 claim from naturalist and mountaineer Alexander Tewnion:

In October 1943 I spent a ten day leave climbing alone in the Cairngorms… One afternoon, just as I reached the summit cairn of Ben MacDhui, mist swirled across the Lairig Ghru and enveloped the mountain. The atmosphere became dark and oppressive, a fierce, bitter wind whisked among the boulders, and… an odd sound echoed through the mist – a loud footstep, it seemed. Then another, and another… A strange shape loomed up, receded, came charging at me! Without hesitation I whipped out the revolver and fired three times at the figure. When it still came on I turned and hared down the path, reaching Glen Derry in a time that I have never bettered. You may ask was it really the Fear Laith Mhor? Frankly, I think it was.”

Skeptics are quick to cast doubt on the Greyman myth. One common explanation is the phenomenon known as a Brocken Specter or mountain specter. Under certain atmospheric conditions, when the sun is at the proper angle, one’s shadow can be projected onto the clouds or mist in front of them. The effect being a giant, shadowy human figure looming in the distance. While this is certainly plausible and rational reasoning, it certainly doesn’t explain why such a shadow would charge a person and chase them down the mountain.